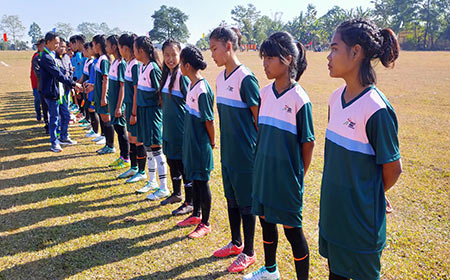 KANGKU, Dec 29: Kangku Secondary School-A beat Sogum Mimang School 3-1 in the inaugural match of the Khelo India U-17 Girls’ Football League 2019-20 played here in Lower Siang district on Sunday.
The Khelo India football league is an initiative of the government to promote the sport, identify raw talents, and groom them to excel in the discipline.
Arunachal Pradesh Football Association (APFA) secretary Kipa Ajay urged the players to grab the opportunity to show their talents. He advised them to maintain discipline on and off the field.
Among others, Kangku CO Nobu Chader and public leader Renya Tai attended the opening ceremony.
The football league is being organised by the APFA, in coordination with the Lower Siang District Football Association.