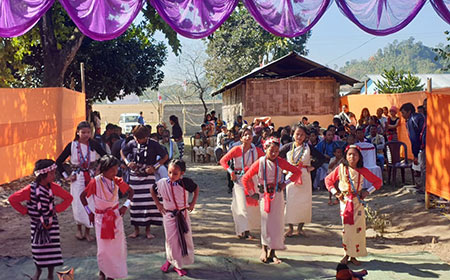 Staff Reporter
ITANAGAR, Dec 31: Donyi-Polo Day was celebrated by the believers of the indigenous faith across the state on the last day of the year to pay respect to the natural elements.
In Papum Pare district, the day was celebrated at the Hollongi nyedar namlo and the ganging in Itanagar by the followers with traditional zest and religious zeal.
Attending the celebration, Sports Minister Mama Natung exhorted the followers of Donyi-Polo to strengthen their religious identity as descendants of Abo Tani, and their faith in Donyi-Polo.
Stating that “Donyi and Polo are the only gods we can see day and night,” Natung said “the lack of scriptures and late education has led people to converge into other religions.”
While he said that everyone is free to practise a religion of their choice, he advocated preservation of an individual’s tradition and culture.
Natung also informed that the state government has already approved the creation of Donyi-Polo prayer centres in all districts of the state.
Responding to a request, the minister assured that the PHE department will be notified to provide proper water supply to the residents of Hollongi. He also assured to donate a vehicle “within a week” for smooth functioning of the nyedar namlo.
Indigenous Affairs Undersecretary Pill Topu expressed hope that the followers of Donyi-Polo would continue to spread the message of peace and brotherhood in the state.
He highlighted how a separate department had to be created to preserve the indigenous practices, and called on the people to preserve “not only their traditional attires but also the culture and traditions of their ancestors.”
Topu also urged the minister to revive the state’s indigenous sports.
Chairman of the Hollongi nyedar namlo, Taniang Ningee, held a prayer for peace, harmony and preservation of traditional practices.
Devotional and traditional dances were performed by the believers of Donyi-Polo among the tribal communities living in Kokila, Balijan and Hollongi.