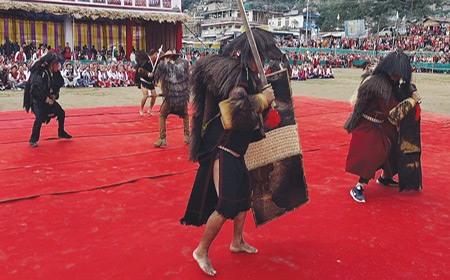 Correspondent
ITANAGAR, Jan 5: Si-Donyi festival celebrations began with traditional fervour in Daporijo, Dumporijo, Taliha, Nacho, Naharlagun and other places of the state.
Attending the third day of the festival in Upper Subansiri HQ Daporijo, Tagin Cultural Society secretary-general Lardik Kare stressed the need to preserve one’s language along with the flora and fauna.
He expressed discontent over the state government’s decision to schedule the state assembly session and the Arunachal Pradesh Teachers’ Eligibility Test on days close to the festival.
“This is holding back many from attending the festival, including candidates and legislators from the community,” he said.
Kare highlighted the demand for construction of the Mebigeko-Gerukahamukh road, which is the shortest route connecting Upper Subansiri with Itanagar via Assam. He also called for early construction of the Taliha-Tato road connecting Upper Subansiri with Shi-Yomi district.