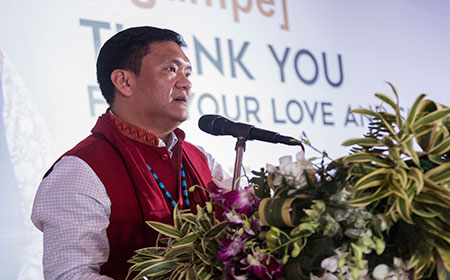 ROING, Jan 13: Chief Minister Pema Khandu on Monday said the state government is going to review the land acquisition process in the state “to fast-track development activities.”
“A holistic approach towards land acquisition will be made in a review meeting to be called soon with the land management department,” the CM said at a public meeting organised here in Lower Dibang Valley district by Dambuk MLA Gum Tayeng.
Stating that currently no definite procedure is followed for land acquisition in the state, Khandu said, “Many a time, the deputy commissioner carries out the process without the state government in the loop. This results in land compensation rates varying at tremendous rates between different districts.
“To eliminate such discrepancies, which often result in litigation, conflicts and opposition, a solution will be worked out once for all to expedite development works, particularly road development,” he said.
Khandu said the state needs to speed up the work on the roads and the highways as the slow progress is hampering Arunachal’s economic growth.
“The eastern districts fare better than the western districts in the progress of road development as these districts prioritize development over seeking land compensation,” he observed.
The CM also advocated bringing out beneficial policies and programmes.
“The unemployment woes of the youths have to be eliminated by encouraging investments and industrialization to create jobs and opportunities,” he said, adding that his government recently launched the new industrial policy to boost industrial growth.
Khandu, however, said “any development initiative in the state will be always taken keeping in mind the sensitivity to preserve the state’s vast ecological resources.”
Among others, Home Minister Bamang Felix, Education Minister Taba Tedir, PHED Minister Wangki Lowang, Health Minister Alo Libang and Tourism Minister Nakap Nalo, and MLAs Phurpa Tsering, Zingnu Namchoom, Ojing Tasing, Mopi Mihu, Mutchu Mithi, Kaling Moyong and Dasanglu Pul were present. (CM’s PR Cell)