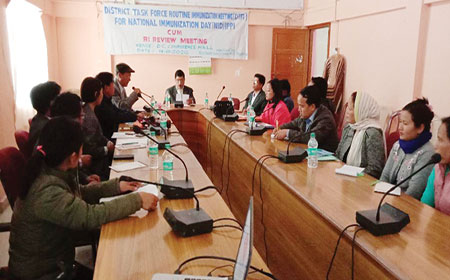 YINGKIONG, Jan 14: Upper Siang DC (in-charge) Gyabo Pertin chaired a meeting of the district task force for immunization (DTFI) here on Tuesday to discuss the upcoming National Immunization Day (NID) and the Intensified Pulse Polio Immunization (IPPI) programme.
Pertin requested all medical officers (MO) to “achieve 100 percent target in the immunization activities,” and assured to provide all required assistance from the administration.
He advised the medical staffers to “dedicate their services to the people of the district and keep team spirit in every step for better coordination and implementation of health activities.”
DMO Dr Dubom Bagra informed that “the NID for IPPI will be conducted from 19 January throughout Upper Siang district, along with the rest of the state.”
He spoke on the importance of the NID, preventing and eradicating wild polio virus from the country, and earning a polio-free country certificate from the World Health Organisation.
The DMO highlighted the district’s preparations for the NID, and requested all stakeholders to fill up the required format issued to them during the three-day IPPI campaign.
DRCHO Dr Appir Apang made a PowerPoint presentation on the “IPPI micro-plan for Upper Siang” and informed that there are 3005 beneficiaries in the district. He requested all participants to “achieve the target at any cost.”
Some of the participating MOs raised the issues of shortage of vehicles, petroleum items and incentives.
In Tawang district, DC (in-charge) Lobsang Tsering chaired the DTFI meeting on the NID and Intensified Mission Indradhanush (IMI) 2.0.
All the members, including doctors, and representatives of NGOs, religious institutions, the GREF and the paramilitary forces attended the meeting.
Tsering commended the district’s health workers for reaching out to the interiors to provide services, and requested the doctors and the health workers to seek to achieve “hundred percent target of immunization.”
He requested other government employees and the paramilitary forces to assist the health workers during the NID.
DRCHO Dr Lobsang Tempa made a PowerPoint presentation on IMI 2.0, enumerating the district’s plan to achieve the desired target of immunization, and the activities undertaken during the first round of IMI 2.0 in December last year.
DMO Dr Wangdi Lama expressed satisfaction over the performance of the health workers, and sought cooperation from all in getting every child vaccinated.
“This year, during the NID in Tawang district, the target is to vaccinate 4680 children of 0-5 years of age,” he informed. (DIPROs)