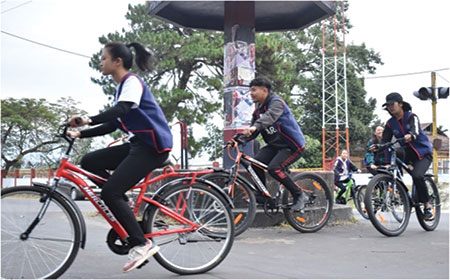 PASIGHAT, Jan 18: The NSS unit of the College of Horticulture & Forestry here in East Siang district organised a rally, a walkathon and a cyclothon on Saturday as part of the ‘Fit India’ campaign.
During the events, which were coordinated by volunteers and faculty members associated with the college’s physical education course, the volunteers were sensitized to the significance of the ‘Fit India’ campaign.
A ‘Fit India’ walkathon was organised in West Kameng HQ Bomdila also on Saturday. It was flagged off by EAC Sang Khandu. Similar activities were also conducted in other parts of the district.
DIPRO adds: In East Siang HQ Pasighat, ADC Tatdo Borang flagged off a bicycle rally under ‘Fit India’, organised by the district administration in collaboration with the health department.
Hundreds of cyclists, members of Nehru Yuva Kendra, District Sports Officer (in-charge) T Tatak, DACO A Jamoh and members of the District Health Society, including MS Dr YR Darang, DRCHO Dr T Gao, and others, participated in the event.