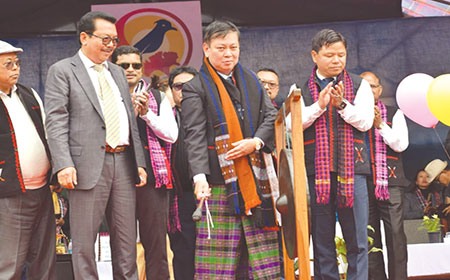 PPIF a triumph of tribal heritage and ethnicity: DCM

PANGSAU, Jan 20: The 8th edition of the Pangsau Pass International Festival (PPIF) began here in Changlang district on Monday.
Deputy Chief Minister Chowna Mein along with Myanmar’s Ambassador to India, Moe Kyaw Aung, attended the inaugural function, which took place in the presence of a large number of visitors, cultural troupes, artists, and others.
Aung lauded the organising committee for “the excellent arrangements in organising the annual international festival, which is symbolic of the age-old cultural ties between India and Myanmar.”
“Platforms such as PPIF would go a long way in forging formal agreements and deepening economic, political and cultural ties between the two nations. It will also help to explore the tourism potential of both the countries,” he said.
The ambassador commended the Arunachal government for taking keen interest in developing the state’s tourism potential, and reaffirmed Myanmar’s “utmost support and full cooperation for cementing the bond between the two countries.”
Mein in his address recalled the historic aspect of the festival, which derives its name from the Pangsau Pass, located 3727 ft above sea level, on the crest of the Patkai Hills, on the Indo-Myanmar border.
“This festival has been successfully scripting the triumphs of tribal heritage and ethnicity of the region. It unearths the magnificent beauty of this secluded region,” the DCM said.
He said the time had come for stakeholders to “give paramount importance for reopening of the historic Stilwell Road,” stating that it would be mutually beneficial to India and Myanmar.
“The opening of the road will usher in a new era of development in the region and also connect the NE with the ASEAN countries through Myanmar,” he said.
Nampong MLA Laisam Simai said “boosting of cultural ties between both the countries can be done through trade and tourism.”
Simai, who is also the festival’s organising committee chairman, said the committee “is looking forward to organise the festival in a grand manner every year.”
Among others, ministers Tumke Bagra and Kamlung Mosang, Deputy Speaker Tesam Pongte, and MLAs Phosum Khimhun, Zingnu Namchoom, Gabriel D Wangsu and Samlung Mossang were present on the occasion.
The festival is a joint initiative of the tourism department and the district administration. It coincides with the ‘border area programme’ being sponsored by Dimapur (Nagaland)-based NEZCC, in collaboration with Arunachal’s art & culture department.
Three more venues have been added in this year’s edition of the PPIF: Kovin village (for adventure tourism), Tikhak Taipi (for art & culture events) and Nongkey village (as a spot for music lovers).
The three-day extravaganza includes a plethora of events, such as folk songs and dances, traditional sports, ‘para-jumping’ show by the 13 Assam Rifles, Pangsau Pass expedition, sightseeing, ‘eco-trekking’, and rafting on the Rima and the Namchik rivers.
There will also be cultural presentations by troupes from Myanmar, Maharashtra, Nagaland, Meghalaya and Arunachal. (DIPRO)