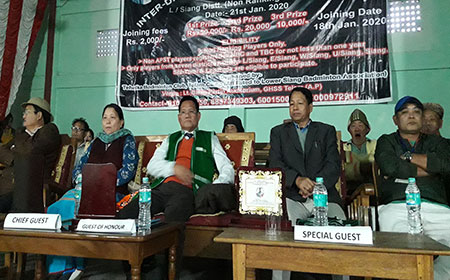 [ Prafulla Kaman ]
TELAM, Jan 21: The second edition of Nyalo Kadu Memorial Inter District Badminton Tournament (Man’s double) began at Telam HSS auditorium in Lower Siang district on Tuesday.
Altogether 30 players from seven different districts including Siang districts, Lepa Rada and Syomi are participating the tournament which is sponsored by family members of late Nyalo Kadu and organized by Tehelka Badminton Club of Telam.
In the opening game, the teams of Karpa Kayi and Tumke Riram beat Lukri Kamba and Jatum Kaye by 3-1 sets.
Superintendent of Bakin Pertin General Hospital, Pasighat, Dr Y R Darang in her inaugural address urged the participating players to build up their skill to compete in national and international levels. She expressed her hope that such sports event will bring unity and sense of brotherhood among different tribes living in different districts in the state.
PWD engineer Take Richo asked the players to maintain discipline and sportsman spirit. He also urged the organizers to continue their efforts to keep up the wisdom of late Kadu alive in the society.
Late Nyalo Kadu’s son Nina Kadu recalled various social contributions of his father.
The champion team of the tournament will get Rs 50,000 along with coveted trophy, while the runner-up will get Rs 20,000 with a trophy. The third prize of the tournament is Rs 10,000.