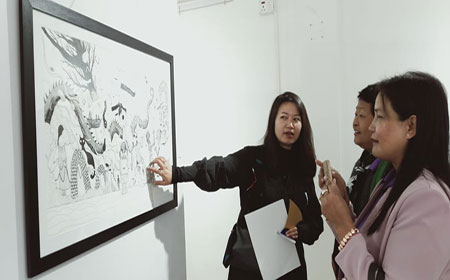 Staff Reporter
ITANAGAR, Jan 27: Ten female artists of the state have come together for a four-day all-women art exhibition, themed ‘Emancipation’, which got underway at the Chimchoo Art Gallery here on Monday.
Works of artists Mamang Dai, Miranda Pertin, Kompi Riba, Nang Sunitthi CT, Rinchin Choden, Chiging Yabii, Jompi Ete, Chamdi Boi, Mary Riram and
Sunaina Linggi are on display at the gallery. The exhibition is being organised by the Chimchoo Art Gallery and Wildflower Productions.
Sunitthi, Pertin and Yabii shared the visions behind the artworks they have created, based on the theme of emancipation, specifically for the exhibition.
A teacher by profession, Sunitthi explained that her painting, ‘I am untitled’, is about “the feeling of a lack of identity in women.”
“Many women do not know where they stand in life and in society. They do not know their importance. Normally, people tell women that we have to be a certain way, and we do not think about what we can or want to be. The faceless female figure represents the feeling of a lack of identity in us,” she explained.
Pertin, who is the lone sculptor in the exhibition, spoke about the intentional disfigurement visible in all three of her sculptures (representing the struggles of both men and women), and lamented how “the idea of perfection is killing us.”
A self-taught artist, Yabii explained that her ‘Gutsy Lady’ represents a woman ignoring the social norms and restrictions put on her and moving ahead with the changing times.
Earlier, Arunachal Pradesh Women’s Welfare Society (APWWS) president Gumri Ringu highlighted the contribution of female artists throughout history through various art forms, such as writing, weaving and embroidery.
“The artistic contributions of women have always been suppressed or sidelined. This all-women art exhibition is an example of how far female artists have come. You can speak through your art and convey that a woman is capable of making her own decisions,” she said, and encouraged the artists to portray issues concerning women through their artworks.
Arunachal Pradesh State Commission for Women (APSCW) Chairperson Radhilu Chai Techi, who inaugurated the exhibition, said the commission has submitted a representation to the state government, seeking “special soft loan facility for unemployed women entrepreneurs.”
She urged NGOs, and all the artists present, to take up such issues through discussions on various forums, “so that the government is pushed hard to consider the recommendations as early as possible.”
Techi also informed about the commission’s recommendation regarding home loans for widows and single women.
“With several cases of polygamy in the state, such projects will help women overcome the difficulties they face and they can start anew,” she said.
APWWS secretary-general Kani Nada Maling congratulated the gallery’s curator, Dakli Gara, for organising the exhibition and putting the spotlight on female artists. She invited female artists to “take their work to a larger forum, in collaboration with the APWWS or the APSCW, so that their talent can be displayed to a larger audience.”
Members of the APSCW, the APWWS and the Arunachal Fine Arts and Crafts Association also attended the inaugural day.
The four-day exhibition, which will conclude on 30 January, is open to the public from 11 am to 6 pm.