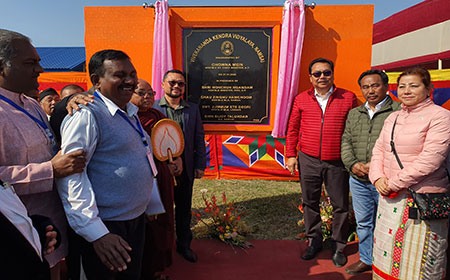 NAMSAI, Jan 27: Deputy Chief Minister Chowna Mein inaugurated the 40th Vivekananda Kendra Vidyalaya (VKV) of the state here on Monday.
Speaking after the inauguration, Mein said that a teacher to teach the Khamti language would be posted at the school “to keep the traditional values, local dialect and culture alive.”
He acknowledged the contribution made by the VKVs in man-making and nation-building, and lauded their efforts towards promotion, preservation and protection of the indigenous culture and traditions of the state.
He advised the school’s students to “resolve to do something significant in life, apart from excelling in academic studies.”
He said the Arunachal Pradesh Teachers’ Transfer & Posting Policy, 2020, has been implemented to ensure need-based distribution of teachers in the state.
Expressing concern over the growing drug menace in the district, Mein urged the VKV authority to conduct awareness programmes to sensitize students and parents to the harmful effects of drug abuse.
RWD Minister Honchun Ngandam advised the students to “develop self-confidence and equip themselves to take the nation to a greater height.” He also advised the students to follow the ideals of Swami Vivekananda and draw inspiration from his teachings.
Namsai MLA Chau Zingnu Namchoom stressed on the importance of education for overall development of the district, and called for the Khampti language to be introduced in the school curriculum in order to preserve the local language among the younger generation.
He mentioned the contributions made by Chief Minister Pema Khandu, Mein, Ngandam, and former chief ministers Kalikho Pul and Nabam Tuki for the establishment of the school.
Namchoom called upon all to extend support for the growth of the school.
VKVAPT Joint Secretary Rupesh Mathur informed about the activities taken up by the Vivekananda Kendra in Arunachal.
Pariyatti Sasana Buddha Vihara Namsai abbot Aggaddhama, Lekang MLA Jummum Ete Deori, former commissioner Tape Bagra, DC Bijoy Talukdar and DIG (E) Take Ringu were also present on the occasion. (DCM’s PR Cell)