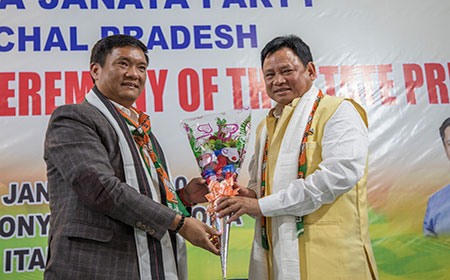 Staff Reporter
ITANAGAR, Jan 29: Pakke Kessang MLA Biyuram Wahge formally took over as state BJP president. He replaces MP Tapir Gao as party president.
Wahge has served the state BJP in distinct capacities since 2000. He was the state BJYM general secretary from 2000-03; the state BJYM vice-president from 2003-05, and the state BJYM president from 2005-08. He went on to become the state BJP’s treasurer in 2008, and the party’s state general secretary in 2014.
Wahge was elected as MLA from the Pakke-Kessang constituency in the 2017 bye-election, after then incumbent MLA Kameng Dolo’s seat was vacated by a high court ruling.
Chief Minister Pema Khandu and Union Minister of State for Sports (Ind) Kiren Rijiju, among others attended the event.
Addressing the participants, the chief minister said that the “state government hopes to get full support of the party in carrying ahead the successful implementation of all state and central flagship programmes.”
He said the government needs to be closer to the people and this could be made possible with dedicated service attitude of party members.
The chief minister further called on the party workers not to indulge in corruption.
He said “the government shall be harsher when it comes to its own party workers found involved in corruption.”
On the occasion, the newly elected BJP district presidents, mandal presidents and the state council members were felicitated. (With CMO inputs)