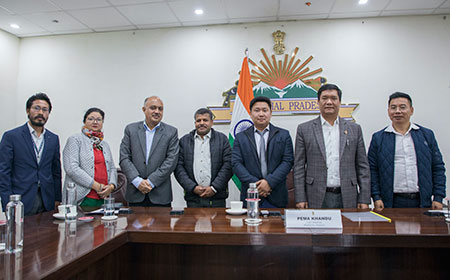 ITANAGAR, Jan 29: Chief Minister Pema Khandu on Wednesday, said the Mega food park coming up in Papum Pare district, has received Letters of Interest (LoT) from 12 companies.
Of the 12, nine are local entrepreneurs and the rest three are multi-national companies. The total investment they would make in the park stands at Rs 16.7 crore, he said.
Khandu said, “This is a good sign. We need to advertise and sell the feasibility of our park so that many more local and multi-national companies set up industries here. Our farmers would hugely benefit from such food industries.”
While assuring to complete the responsibilities of the state government like providing road, water and power at the earliest, Khandu urged the promoter to expedite the groundwork at the site.
He also suggested to the departments of Agriculture and Horticulture to study the feasibility of produces that can be harvested in the state region-wise vis-a-vis their market demands and prices, an official communique said.
As suggested by the promoter, Khandu called for focusing on produces like guava (Lalit), pineapple and lemon, which currently have huge demands in the food processing industries.
He said the state government would strengthen backward linkages by providing assistance to farmers in producing raw materials required by the food park.
The state government would provide best quality saplings to local farmers on subsidized rates to promote backward linkages, he added.
Components of the food park also include two primary processing centres -one at Bhalukpong in West Kameng district and other at Yachuli in Lower Suban-siri district.
The mega food park scheme of the Union Ministry of Food Processing Industries aims at providing a mechanism to link agricultural production to the market by bringing together farmers, processors and retailers to ensure maximizing value addition, minimizing wastage, increasing farmers income and creating employment opportunities.
A mega food park typically consists of supply chain infrastructure, including collection centres, primary processing centres, central processing centres, cold chain and around 25-30 fully developed plots for entrepreneurs to set up food processing units.
The park is coming up at Dolikota village. Around 75 acres of land has been procured for the project of which 50 acres has been provided for food industries.
The food park will be set up at an estimated cost of Rs 159 crores and would have facilities such as pet bottle line, warehouse, multi-chamber cold storage, tetra-packaging line, ripening chamber, food testing laboratory and automated sorting-grading line. (PTI)