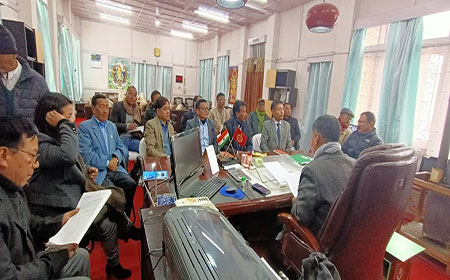 BOMDILA, Jan 29: The new deputy commissioner of West Kameng Karma Leki convened a meeting of all the administrative officers of the district here on Wednesday to have firsthand knowledge of the ground realities in the district.
Reviewing the administrative set up and infrastructural status of all the administrative circles, the DC reiterated the need for team work in the interest of public service and also for the need of being pro-active while discharging one’s duty.
The administrative officers updated and dwelt on the present status of their respective circles including subjects related to Census, on-going preparations for Panchayat elections, Special Charges provision (Enumerators), use of census mobile app, sanitation, SLWM, traffic regulation, additional weapon inclusion etc.
The meeting centered mainly on the land acquisition and compensation issues along the Balipara-Charduar- Tawang (BCT) and Orang-Kalaktang-Shergaon- Rupa-Tenga (OKSRT) roads.
Earlier in the morning, DC Karma Leki inspected the offices of the DC’s office and interacted with the staffs.
Later in the evening, a coordination meeting was held with the HODs and HOOs wherein the Deputy Commissioner asked the officers to submit brief write-ups of the departmental schemes and proposals.
On the submissions of CO Kamengbari-Doimara Kesang Wangda, the DC directed the DD APEDA and EE PWD to install sufficient numbers of street light as the circle happens to be porous and construct the connecting culvert bridge at the earliest as the Panchayat polls are approaching. The HODs too presented their grievances to which the DC assured to take up the issues on priority basis. DIPRO