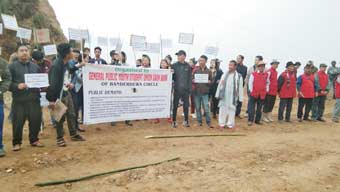 KARSINGSA, Jan 30: Demanding immediate reopening of the Karsingsa stretch of NH 415 for vehicular movement, a group of citizens from Banderdewa circle, including gaon burahs, staged a protest at the Karsingsa sinking point area on Thursday morning.
Highlighting the miseries faced by the people of Banderdewa and Karsingsa, especially by students and patients who are now compelled to use the Gumto road to reach Naharlagun, Nirjuli and other areas, Banderdewa-Karsingsa Youth Welfare Association president Chello John alleged “undue harassments and unauthorized checking by the Assam police personnel.”
“The Assam Police officials in Banderdewa, Harmutty and other areas constantly target the people from our state going to Gumto and ask for documents on one pretext or the other,” he said, adding: “Many of our people are even crossing the Dikrong river to reach their destinations.”
Informing that “no considerable work progress or effort in this regard has been made” even though the locals had fully cooperated with the administration and the contractor till 24 January, John said his association did not receive any response from the district administration despite twice submitting memorandums in the matter.
Echoing a similar sentiment, one of the protesting GBs, Tache Lombi, while narrating a recent incident informed that the police officials in the neighbouring state are resorting to checking without any official order.
“All this is happening due to the delay in reopening of this important road, and we have been compelled to come out and protest after seeing the suffering of the people and the students,” he said.
“The state board exams are starting from the 4th of February; does the district administration want the students to suffer?” asked another protestor, Kipa Taniang.
A former ASM from Banderdewa, Taniang also alleged that the ongoing work was being carried out flouting the DPR. Casting aspersion on the intent of the authorities, Taniang lamented that the stretch of the highway in Karsingsa has become “a source of minting money.”
However, representatives from M/s BK Construction, which is currently executing the project, were quick to deny the allegation of delay and flouting of DPR.
Representing the concessionaire, Bharat Bagang said that “work is being done in strict adherence to the DPR while maintaining the right of way at the same time.”
“We have engaged enough men and machineries for the work. By the 3rd of February, the road stretch will be fully motorable and open to the public,” informed Bagang, adding that “the firm had arranged for vehicles to be kept on the other side of the block point to ferry students and patients to their destinations till the last few days when the blockade was enforced.”
Speaking to this daily, Banderdewa EAC (in-charge) Neelam Teji said the road closure order is “for the greater interest of the public only” as it would enable early completion of formation cutting and other works.
He said his office has been receiving feedbacks from the people “welcoming the road blockade to ensure early construction.”
In addition to reopening of the road for vehicular movement, the protestors also demanded a high-level inquiry into the reasons for the delay in execution of works by the contractor, and the grounds on which the district administration issued the order for complete closure of the highway at the Karsingsa sinking point for 20 days. They also demanded transfer of the present executive engineer and assistant engineer from the Naharlagun highway division for their alleged inefficiency, and immediate cancellation of the work awarded to M/s BK Construction for allegedly flouting the DPR and carrying out substandard work.
The district administration had issued the order for closing down this stretch of the road for 10 days (from 25 January to 3 February) to enable widening of the road formation and construction of culverts at the Karsingsa sinking point, on the request of the Naharlagun highway division executive engineer. (The reporter is an intern at The Arunachal Times.)