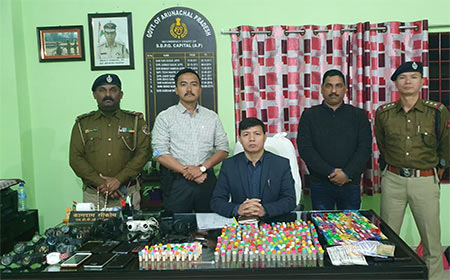 CHIMPU, Feb 2: The capital police on Sunday apprehended two suspected drug peddlers, identified as Techi Tasap (25) and Techi Taram (24), from a rented accommodation in Kongko village near here.
SP Tumme Amo informed that the duo was caught “red-handed with suspected brown sugar (approx 8.5 gms) in their possession, packed in 46 small plastic tubes, along with a syringe, an office knife, a purse containing sale proceeds, and 600 empty plastic tubes.”
A police team led by ASP Harsh Indora, Itanagar SDPO Kamdam Sikom, Inspector D Bagra and L/SI Millo Sumpi, along with IRBn and CRPF personnel conducted the raid after receiving specific input that drugs were being sold from the apartment in Kongko.
The team also raided the houses of various drug sellers in Chimpu, Lower Chimpu, Jullang and Vivek Vihar but the drug dealers were reportedly not present in the houses and had left no contraband substances behind, except for some empty, used tubes, silver foil papers, and 66 lighters.
“In another raid, 10 mobile sets, 13 watches, three headphones and an air pistol were seized from another place and are suspected to be snatched items, while the air pistol is suspected to be used
to threaten victims,” the SP informed.
The capital police have urged the public to provide input and information on crimes such as drug trafficking, car lifting, thefts, etc.
“Your names will be kept secret and you will be suitably rewarded,” the SP said.