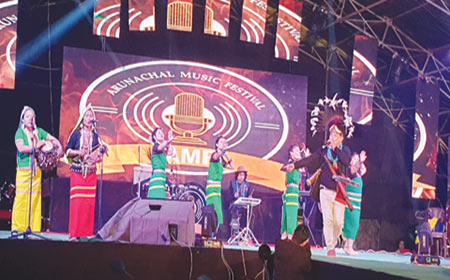 ITANAGAR, Feb 3: “If we want our identity to be intact, we have to follow the three Ps, that is, protect, preserve and promote indigenous culture and tradition,” said Home Minister Bameng Felix, attending the closing ceremony of the 2nd edition of the five-day Arunachal Music Festival (AMF) at Sango ground here on Sunday evening.
He said Arunachal is known for its rich cultural heritage and tradition, along with biodiversity.
“The culture and identity of several tribes of the state are on the verge of extinction and it is the need of the hour that everyone comes together and joins hands for their protection, preservation and promotion,” he said.
The minister commended the festival’s organising team and the executive members of the music band EDMB “for providing a single platform to unite all the tribes of the state through music.” He also gave away the prizes to the winners of various competitions.
Artistes Taba Yall Nabam, Delong Padung, Bicky Para Tok, Nabam Meka, JB Nabam and others performed during the closing ceremony.
Organising chairman Toko Yallam Gemi said that the AMF has created “one of the biggest platforms for the musicians of the state,” and that its motto is to promote folk music and folksongs of the state.
“We have made more progress in the second edition, compared to the first edition,” she added.
EDMB chairman Takam Dado Tallum highlighted the activities carried out during the five-day festival. He sought support from the state government and the stakeholders for protection, preservation and promotion of the indigenous traditions and cultures of the state.
Among others, AMF executive director Tai Tugung also spoke.
The music festival showcased, inter alia, traditional music, dance, drama, songs and fine arts, a fashion show, and a ‘music display’ by an RGU team.