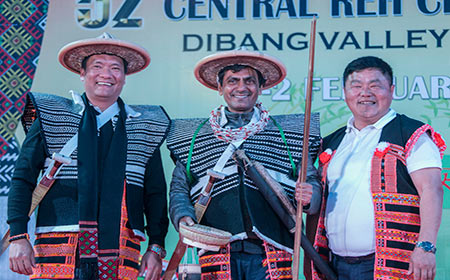 Roing-Anini road to be completed in 4 yrs: CM

ANINI, Feb 3: Chief Minister Pema Khandu on Monday gave assurance that the under-construction two-lane highway from Roing in Lower Dibang Valley district to Anini in Dibang Valley will be completed in four years.
“Difficult terrain and distinct topographical features of the district are causing delay in the initial work on the 230-km-long road,” Khandu said.
The chief minister, who travelled by road to Anini from Itanagar and joined the 52nd central Reh festival celebration here on 1 February, expressed gratitude to the Mishmi community for having him in their midst.
“Reh festival is the identity of the community that honours their priests, who are at the core of the festival,” he said, greeting the people on the occasion.
Lauding the scenic beauty of Dibang Valley, Khandu said Anini and its adjoining areas have optimum potential to become the top destination for tourists from across the globe.
“People know about Tawang and Mechuka, but I can vouch that if we mix Tawang and Mechuka, the byproduct will be Anini.
I guarantee that Dibang Valley will emerge as the most sought after tourist destination of Arunachal Pradesh in years to come,” he said.
He advised the Mishmi youths to familiarize themselves with the tourism and hospitality trade, and encouraged the people to “go for homestays, as tourists, especially those from abroad, prefer to stay with locals rather than in hotels.”
The CM informed that the state government has framed an industrial and investment policy that will offer various incentives to investors.
The policy will be released by union Home Minister Amit Shah, who is expected to attend the Statehood Day celebration on 20 February, he said.
Khandu appealed to the people not to be swayed by misinformation over the proposed hydropower project in the district, and urged them to contact him or the chief secretary to get their doubts, if any, on the project cleared.
Khandu called upon the people to be partners with the government, so that developmental projects get implemented successfully and smoothly.
Responding to a memorandum submitted by local legislator Mopi Mihu, the chief minister assured to have the Achenso-Biyanli road constructed, “under the CRF or the NESID,” and asked Chief Secretary Naresh Kumar to pursue the same.
To the request for a new circuit house in Anini, Khandu assured that the proposal will be included in the upcoming state budget.
Earlier in the day, Khandu inaugurated a fire station and a water treatment plant, and laid the foundations of the SDO headquarters in Arzoo, the mini-stadium, the district hospital building and the mini-secretariat in Anini, and ‘innovative and multipurpose water harvesting’ in Gipulin.
He also visited the Indian Army camp in Anini and interacted with the officers and jawans of the Kumaon Regiment posted there.
Bollywood actor Nawazuddin Siddiqui, MP Tapir Gao, DGP RP Upadhyaya, and the chief secretary also attended the Reh celebration. (CM’s PR Cell)

Smitten by the scenic beauty of Arunachal, acclaimed actor Nawazuddin Siddiqui, who attended the Reh celebrations in Anini on Saturday, promised that his next film would be shot in the state.
Siddiqui credited Chief Minister Pema Khandu for extensively promoting the beauty of Arunachal through his Twitter handle. He said he never knew the scenic beauty of Arunachal till he started following the tweets of the chief minister.
“I came to know about Arunachal Pradesh, its natural beauty, and the colourful people only from his (Khandu) tweets. He is the best promoter and advertiser of the state,” he said.
Siddiqui said his next film, which is in the scripting stage, was initially planned to be shot in Garhwal. “However, after seeing the pictures of Arunachal Pradesh and its people on Khandu’s Twitter handle,” he said, “the decision was changed from Garhwal to Arunachal Pradesh.”
Siddiqui urged the people to stick with their tradition and culture. He said the culture of the state is its identity and people like him would travel hundreds of miles to see and feel it.
“You will not know but I will tell you. Nowhere in the country have I ever seen such glowing, positive and serene faces. Arunachalees are blessed and you must be proud of it,” he announced.
In a lighter vein, the actor said travelling to Anini from Dibrugarh reminded him of the Samuel Beckett play, Waiting for Godot.
“All through the 12-14 hour journey, I felt like ‘Abhi aa jayega… abhi aa jayega’, but ‘kuch aa hi nahi raha tha!” he quipped.
He said, however, that all the troubles and tiredness “flew away” when he saw the glowing faces of the people waiting for him.