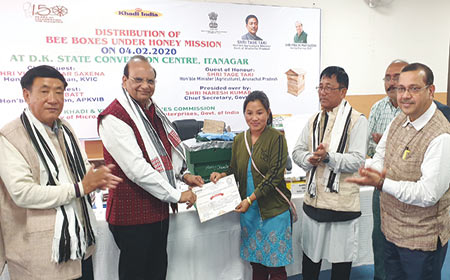 ITANAGAR, Feb 4: Signalling a major boost to beekeeping practices in the state, Khadi & Village Industries Commission (KVIC) Chairman Vinai Kumar Saxena on Tuesday announced to sanction “any amount of bee boxes and funds required to produce it.”
He made the announcement while distributing 1000 honeybee boxes to 100 beneficiaries under the Honey Mission, at the Dorjee Khandu State Convention Centre here.
The distribution programme was organized by the KVIC, which is under the union MSME ministry.
Pointing out the vast potential and opportunities in the state for the development of khadi and village industries, especially beekeeping and related activities, the KVIC chairman advised the people to “take up beekeeping zealously.”
He said that, given the geography of the state, the beekeepers can immensely benefit because “honey produced in high altitude areas are considered better and has high market value.”
Suggesting to the beekeepers to venture into producing bee boxes and honey processing units, Saxena assured to “give a platform” to honey produced in the state at the KVIC’s more than 8000 stores across the country.
Stating that bee farming not only directly contributes to national development by doubling the agri-horti production through cross-pollination, the KVIC chairman said it also provides various ways for farmers to produce profitable products.
He informed that besides producing honey, the bee farmers can sell beeswax, which costs about Rs 600 per kilo and is used in personal care products; pollen, which costs around Rs 1200; royal jelly, costing Rs 25,000 to 30,000 per kilo; and bee venom, which costs about Rs 1 crore per kilo and is used for developing cancer-related medicines.
The KVIC chairman urged the bankers, especially the State Bank of India, to “go the extra mile in helping the small-scale village entrepreneurs in establishing their projects under the PMEGP scheme.”
He made the appeal against the backdrop of only 312 units under the PMEGP scheme getting sanctioned in the state by banks in a span of three years. He also underscored the need to increase the number of sanctioned projects under the PMEGP, stating that banks can play a pivotal role in developing the khadi and village industries.
Earlier, Agriculture Minister Tage Taki also observed that the number of PMEGP projects sanctioned by the banks is “too low.”
He said “the 312 sanctioned projects should be a year’s figure for a district, instead of it being a figure for the state in the last three years.”
Adding that at this pace it would take generations to achieve the target of generating jobs for more than 6 lakh unemployed youths, Taki also urged the bankers to promote small-scale village industries.
Acknowledging that there have been many lenders who have not repaid their loans in the past, Taki, however, said that “the future of younger generation cannot be compromised for the wrongdoings of their previous generation.”
The minister suggested incorporating beekeeping with existing agri-horti ventures, stating that beekeeping should not be an independent industry. “Rather, it should be an added venture of the existing agri-horti practitioners by identifying such progressive farmers and providing them with bee boxes,” he said.
He requested the KVIC chairman to consider creating modalities and provisions in KVIC projects as per the requirement of the NE states, which he said would go a long way in developing the khadi and village industries in the Northeast.
On the sideline of the distribution programme, the KVIC chairman also presented a memento along with a certificate to the SBI’s Itanagar branch, in recognition of its performance in the implementation of the Prime Minister’s Employment Guarantee Programme (2016-17 and 2018-19) in the state.
SBI Regional Manager AK Dutta accepted the memento given to the SBI for the years 2016-17 and 2018-19, during which 312 units were financed by the SBI and reportedly generated employment for 2496 people in the state.