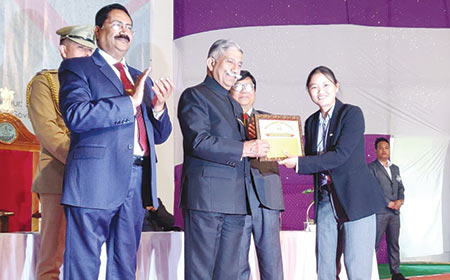 Staff Reporter
RONO HILLS, Feb 4: Attending the valedictory function of the 37th foundation day celebration of Rajiv Gandhi University (RGU) here on Tuesday, Governor BD Mishra gave a clarion call to “recall, remember and reinforce the ideals of the founding fathers of the premier university of the state.”
“There is a need for rededicating ourselves to preserve, protect and promote such ideals, and also recapitulate as to what is actually needed for the future of the university,” he said.
Calling for issues pertaining to education and nation-building to be addressed, the governor emphasized on carrying out research activities in the university “solely for research and not just for securing degrees.”
Speaking on the importance of folklores and the society, former RGU vice-chancellor, Prof Tamo Mibang, stressed on “the study of folklore in various aspects of human life to educate the youth in developing a respectable attitude towards their cultural heritage.”
“In tribal societies, where languages are not in written form, it is only the oral traditions which continue to hold the key in preserving their rich heritage while linking its past to the present,” he added.
RGU Vice-Chancellor, Prof Saket Khuswaha, in his address spoke on the importance of respecting time and punctuality. He stressed on “the responsibility of the university community to build the university so that it can reach newer heights.”
Earlier, the governor, who is also the chief rector of RGU, presented the awards to the exceptional achievers among the university students: Heli Tana Tara, Karling Venia, Pakpo Hina, Likha Yari, Nepo Tamut, Minam Goi, Gami Bogo, Lombi Dakpe, Marge Kamyi, Mini Meto, Bharat Gyadi, Raja Basumotary, Azad Tapak, Dari Laknia, Paresh Sharma, Bamo Tanang, Rukenso Tega, Tali Taba, Soang Yumi, Rubu Lombi and Sum Tateh.
He also presented the Vice Chancellor’s Award for Best Employees for the year 2019-20 to Kurian Thomas, Alaka Chowlu Patowari, Kenyom Kadu, Chatraman Chetry, Raju Jamoh, Sanjay Roy, Gyan Bahadur Rai, Ishok Das Munda and Sarat Konwar.
The programme was also attended by the secretary to governor, the commandant of the 12th NDRF Bn, students, faculty members, and officials of the university. (With inputs from Raj Bhavan)