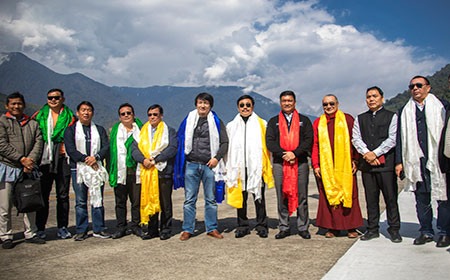 TUTING, Feb 9: Chief Minister Pema Khandu said that Tuting region in Upper Siang district will be included under the Buddhist tourism circuit in order to attract tourists from India and abroad to the place.
Attending a public meeting here, Khandu said, “Tuting is going to witness huge increase in number of tourists as the place is an important Buddhist site and pilgrimage centre.”
He said the place is blessed by Guru Padmasambhava and is considered one of the most sacred places for spiritual practitioners to meditate and practice dharma.
“The region is also popularly known as ‘Pemakod’, an important pilgrimage centre,” he added.
The CM, who was on a two-day visit to the district, informed that Arunachal is witnessing a significant jump in revenue collection and recorded the highest percentage jump in GST collection in the entire country.
“The revenue in the upcoming budget is expected to touch Rs 2500 crore,” he said.
He said Arunachal is also the highest receiver of the share of the states in central taxes under the 15th finance commission recommendations.
“Arunachal is top gainer in the country with 28.5 percent jump in share of central fund,” Khandu added.
The chief minister gave a letter of appreciation to the 23rd battalion of the Grenadiers “for vigilantly guarding the international borders in Tuting sector of LAC and also for extending valuable helps and assistance to the civil administration and the local population.”
On the second day, the chief minister took part in offering Tenzhug (long-life ceremony) to His Eminence Khen Rinpoche of the Nye Sang Dho Ngak Jangchub Dargyelling monastery.
The CM was accompanied by MP Tapir Gao, Health Minister Alo Libang, state BJP vice-president Tame Phassang, and MLAs Jambey Tashi, Tsering Tashi, Phurpa Tsering, Dorjee Wangdi Kharma, Ojing Tasing and Dongru Siongju. (CM’s PR Cell)