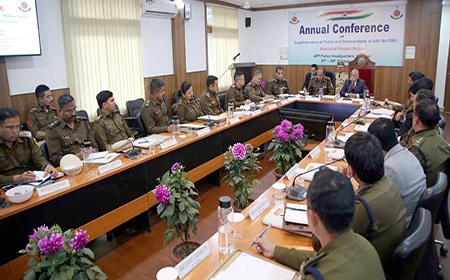 ITANAGAR, Feb 9: Governor BD Mishra called on the police department to win the trust of the people through transparency, honesty and accountability.
Addressing the annual conference of the superintendents of police of the Arunachal Pradesh Police (APP) and the commandants of the APP Bn and the IRBn at the police headquarters here on Sunday, the governor exhorted the police to “demonstrate fairness, promptness and determination.”
He expressed concern over the interstate issues and asked the SPs to “convene regular meetings among the organisations and bring those issues to logical ends.”
“The police personnel must be positive in their approach and maintain peace and tranquillity within their jurisdictions,” he said.
Underscoring the vulnerability of boys, girls and women in orphanages and shelter houses, the governor advised the police to take suo moto action and carry out proper checking. He also advised the SPs to take due cognizance of heinous crimes and initiate appropriate remedial measures.
Stating that “the most important person in the police force is the constable in the beat,” the governor said “he or she should be properly trained, empowered, enabled, motivated and made responsible.”
Mishra complimented the state police for bringing changes in their interface, leadership and coordination in the recent past, and praised the force on its recent successful operations.
Expressing appreciation for the state government for the transfer and posting policy in the education department, Mishra suggested that the police department review the “home police station postings,” saying it would be “practicable, possible and will be in public interest.”
The governor suggested remedial measures to control insurgency in a democratic setup, such as developmental policies and programmes, work opportunities and job creation, effective local administration, quick and fair justice, transparency and honesty in governance, good roads and communication network, proper education, and counter-insurgency operations.
DGP RP Upadhyaya briefed the governor on the two-day conference.
SPs from all the districts and the police headquarters, and the commandants of the APP Bn and the IRBn were present on the occasion. (Raj Bhavan)