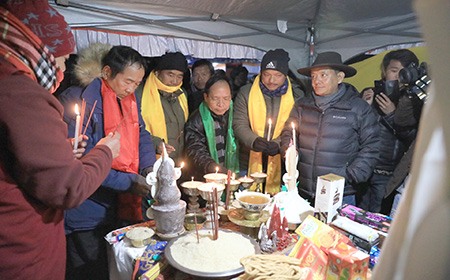 MECHUKHA, Feb 9: RWD Minister Honchun Ngandam said that unity is the biggest strength of the people of Arunachal.
“Despite being different in many ways, such as our culture and tradition, we the people of Arunachal Pradesh are united, and unity is our biggest strength,” the minister said while participating in Sonam Losar festival of the Memba community of Shi-Yomi district here on Sunday evening.
He urged the Memba community to preserve and protect their age-old culture. “We cannot live without culture and it is the responsibility of each one of us to maintain it,” he said.
Thanking the people of Mechukha, particularly Legislative Assembly Speaker PD Sona, for inviting the leaders of Tirap, Longding and Changlang, Ngandam said, “We will spread the beauty of Mechukha and goodness of its people in our places.”
Food & Civil Supplies Minister Kamlung Mossang said, “We are totally mesmerized by the beauty of Mechukha and the hospitality of its people.”
He exhorted the people, especially the youths of Mechukha, to stay away from drug addiction, saying it “has no cure.” He also urged the elders to curb the drug menace among the young generation.
Earlier, Speaker Sona thanked the guests for joining in the Losar celebration despite their busy schedules.
Later, the dignitaries released a book titled Rich Legacy of Memba, authored by Cheeden Goida and edited by Dr Mianzi Hazam. The book dwells on the political, socio-cultural and religious aspects of the Memba tribe, and their gradual development from the beginning to the present time.
Deputy Speaker Tesam Pongte, Koloriang MLA Lokam Tassar, and a host of other dignitaries were present on the occasion. (Speaker’s PR Cell)