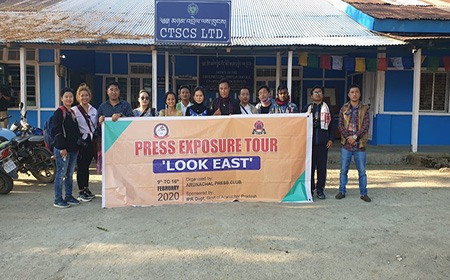 CHANGLANG, Feb 11: The 15-member media team which is on an exposure tour of eastern Arunachal ended its tour of Changlang district on Tuesday.
On the first day, the team visited the World War II cemetery located beside the Jairampur-Nampong road, besides the Indo-Myanmar border, where the journalists saw the international trade building where traders from Myanmar gather every month for a three-day trade.
The team could not make it to Pangsau Pass following the closure of the Indo-Myanmar border trade route due to the outbreak of the coronavirus.
The team also visited a private orphanage school in Kharsang and interacted
with the staffers and students there.
Earlier, the media team had an hour-long interaction with Nampong MLA Laisam Simai about various developmental activities taking place in his constituency.
On the second day, the group went to Namdapha National Park, which is famous for being the only park in India to have four big cat species, besides diverse species of orchids.
The visit helped the group learn about the Centre’s efforts to protect the diverse species in the national park.
The Miao Times Editor Pisi Zauing also joined the media team on the second day of the tour.
The team visited the Choephelling Tibetan refugee settlement near Miao, and the Miao carpet factory run by the Tibetan Cooperative Society Limited.
It also visited the Kharsang oilfield and held discussions with Geoenpro Petroleum Limited deputy director (mines), Sushil Kanwar, who took the team on a tour of the oil wells.
The team will travel to Anjaw on 12 February, where they will visit Dong, the last village situated along the Sino-India border. It will travel to Lohit HQ Tezu on 14 February.
The tour is led by APC President Dodum Yangfo, and is sponsored by the IPR department.