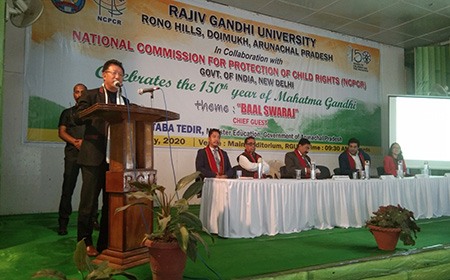 Staff Reporter
Rono Hills, Feb 11: Education Minister Taba Tedir has expressed discontentment over the inept implementation of the Sarva Siksha Abhiyan (SSA), the Rashtriya Madhyamik Shiksha Abhiyan (RMSA) and the Right to Education (RTE) in the state.
“These policies are not bad. However, due to such schemes not being properly implemented all these years, there have been serious effects on the overall educational scenario of our state,” the minister said, lamenting that the state is ranked among the lowest when it comes to pass percentage and results, especially in the board examinations.
Attending the celebration of the 150th birth year of Mahatma Gandhi at Rajiv Gandhi University (RGU) here on Tuesday, Tedir said while “education is the top priority of the Pema Khandu-led government,” parents should also be aware of their responsibilities with regard to their children’s education.
Strongly advocating conversing in one’s own dialect at home, the minister urged the university to involve research scholars in conducting in-depth research on the various tribal dialects of the state, “so that efforts can be taken for their preservation.”
He informed that the state government will have a budgetary provision of about Rs 2 crore for students of Class 11 and Class 12 who wish to pursue coaching for various examinations.
“This will be in addition to the ongoing state flagship programmes in the education sector,” Tedir said.
Rahul Patwa, from the National Commission for Protection of Child Rights (NCPCR), stressed on providing free primary-level education and vocational training.
Advocating “mother tongue influence,” he said Gandhi had also strongly called for teaching in one’s own mother tongue for effective teaching-learning.
“It is important for every one of us to remember the philosophy of Gandhiji as his philosophies have played a very important role in shaping the educational scenario in our country,” said RGU’s Women Study & Research Centre Director, Prof Elizabeth Hangsing.
Speaking out against child marriage, she said “violence against children is against the philosophy of Gandhi.”
Citing the example of African nations where children are taught at least one foreign language in schools, RGU Vice-Chancellor, Prof Saket Kushwaha, suggested teaching different languages to the children as much as possible.
Tedir later felicitated the winners of the essay-writing competition that had been conducted on the occasion of Constitution Day celebration on 26 November, 2019.
While Ome Tamuk, Trisha Bharadwaj and Mudang Onju bagged the first, second and third prize, respectively, in the girls’ category, Lokpa Tamang, Pem Donduk and Madhuriya Mohan bagged the first, second and third prize, respectively, in the boys’ category.
In addition to the students and staffs from various departments of RGU, the programme was attended by students of VKV Nirjuli, St Thomas School, Emchi, and Don Bosco School, Doimukh.
A special film by Childline on child abuse was also screened for the students.
Themed ‘Baal Swaraj’, event was held in collaboration with the NCPCR.