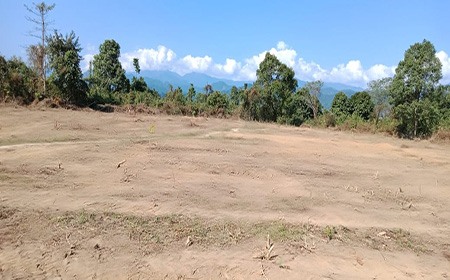 Staff Reporter
Dollungmukh, Feb 12: Tension prevailed in Dollungmukh area following an alleged encroachment by Assam Forest officials and paramilitary forces inside Arunachal’s Rajali area of Dollungmukh village in Kamle district.
Reportedly, the Assam Forest officials carried out encroachment on 3 February, by constructing a kilometre-long road and nearly one hectare of land for their battalion headquarters.
Protesting the brazen encroachment, the Dollungmukh Area Youth Association’s (DAYA) volunteers built a barricade to stop the Assam Forest officials from coming in.
Sources from Dollungmukh informed that Assam Forest officials, along with some villagers from Assam tried to dismantle the barricade built by the DAYA on Wednesday, which led to a confrontation.
However, after the officials and villagers failed to dismantle the barricade, people from Dollungmukh area were allegedly harassed on the road in between NH 15 to Dollungmukh village in Assam area by some villagers.
Kamle district Superintendent of Police (SP) John Pada rushed to the spot and defused the tension. He informed that the deputy commissioner and SP of Lakhimpur were cooperative.
Considering the prevailing tension over the boundary dispute, the state Home department has reportedly deployed two battalions of the IRBn at Dollungmukh.
The All Nyishi Youth Association has also strongly condemned the incident and said that Assam has openly violated the Supreme Court’s ruling for status quo along the boundary.
It said that such encroachment by Assam Forest officials and paramilitary forces inside Arunachal is a serious threat to lives and properties of people living in Dollungmukh area, and requested the Home minister to take action against the encroachers and resolve the issue amicably and at the earliest.
This daily could not get a comment from the Lakhimpur Forest officials and the Assam Police on the development.