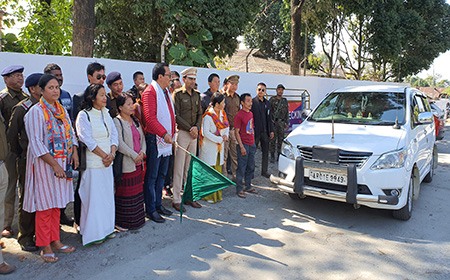 ROING, Feb 13: Deputy Chief Minister Chowna Mein urged the youths of the state to shun consumption of drugs and take the responsibility of creating a better society.
The DCM on Thursday flagged off a vehicle taking six drug abuse victims from Lower Dibang Valley (LDV) district to undergo rehabilitation in Guwahati, Assam.
The victims were identified, and their rehabilitation assisted, by the anti-drug squad of the police here.
Describing youths as the future of the country, Mein urged the six youths to “launch a crusade against drugs after their return from rehabilitation by initiating a mass awareness campaign in the district.”
He commended the initiative of the LDV police, led by SP SK Sain, to educate the youths about the ill-effects of drug abuse.
The SP briefed the DCM on the anti-drug squad (crime unit), which is entrusted with the task of containing drug abuse in the district by arresting drug peddlers and suppliers.
He said that “over 20 cases under relevant narcotics law have been registered, 67 peddlers have been arrested, and a huge quantity of narcotic substances has been seized.”
“The police have drafted a roadmap with the inauguration of a dedicated counselling centre at the Roing police station by Home Minister Bamang Felix and formation of an ADS rehabilitation unit in Roing,” the SP said.
It was through this rehabilitation programme that the six boys were selected to undergo rehabilitation, Sain said.
“It not only fills our heart with hope of a drug-free district but also encourages us to work harder to achieve that goal,” the SP said.
The rehabilitation drive is being carried out in collaboration with corporate houses, and is funded through their CSR schemes. (DCM’s PR Cell)