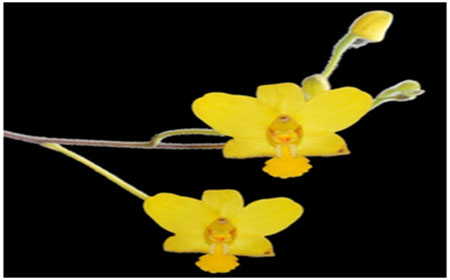 ITANAGAR, Feb 16: A new species of orchid, Spathoglottis arunachalensis (Orchidaceae), has been discovered from West Kameng district.
The new species has been officially named and published in the current issue of the international journal of plant taxonomy, Phytotaxa, coauthored by Dr Jambey Tsering of the Orchid Research Centre (ORC), Tipi, and Dr Kothareddy Prasad of the Botanical Survey of India, Hyderabad.
They informed that the genus Spathoglottis consists of about 50 species, of which only four, including the new discovery, are found in India.
Drs Tsering and Prasad said it was in October 2016 that a team of the ORC noticed a unique, yellow-flowered Spathoglottis population during a field trip to the Sessa orchid sanctuary in West Kameng.
“The species is now confirmed as new and named after the state Arunachal Pradesh, where this novelty occurs,” they said.
The type specimens of the new species are stored in the orchid herbarium in Tipi.
The new species is provisionally assessed as ‘critically endangered’ as per the IUCN criteria (2014). Dr Tsering said the original habitat of the species “is totally disturbed due to ongoing highway construction.”
“Several explorations were made in the adjacent habitat but could not locate the new species,” he said.
Designating the newly reported species as ‘the lost Spathoglottis’, the ORC has announced a cash reward of Rs 10,000 for those who spot the species in its type locality.
“Besides, three more orchid species were recorded by the ORC during the past year, which are new for the state and communicated to various journals for publication,” Dr Tsering added.