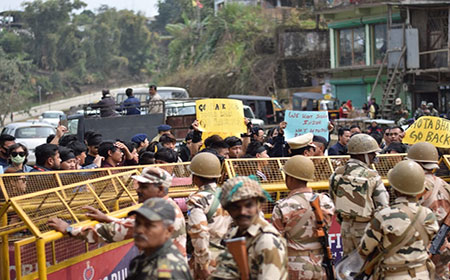 Staff Reporter
ITANAGAR, Feb 21: The Rajiv Gandhi University Students’ Union (RGUSU) staged a protest against union Home Minister Amit Shah’s visit here on Thursday to participate in the 34th Statehood Day celebration.
A sizeable number of students, holding placards reading ‘Mota Bhai Go Back’, shouted slogans against the home minister at Nyokum Lapang here and tussled with security forces while attempting to vault over the barricade that had been set up.
Besides shouting slogans against the Citizenship Amendment Act (CAA), the students sloganeered against the Centre for its repressive approach towards anti-CAA protestors in other parts of the country. They condemned Shah over the crackdown on the students of Jamia Milia Islamia University, JNU and the Aligarh Muslim University.
The RGUSU also demanded that the government remove the sedition charges slapped on anti-CAA protestors, including Krishak Mukti Sangram Samiti leader Akhil Gogoi.
Sources said no arrests were made during Thursday’s protest.
“The objective of our protest was to let the union home minister see that the RGUSU is against the CAA and the atrocities meted out to the students of Jamia, JNU and AMU in anti-CAA protests,” RGUSU president Dopum Sonam said.
The union had issued a statement on the eve of Shah’s visit, stating its intention to stage the protest “to demonstrate our abomination and sentiments towards the egocentric decision of implementing CAA 2019 in the constitution, thereby hurting the sentiments of indigenous people of our state and the country as whole.”
“We protest against the atrocious handling of students of various universities during anti-CAA protests, and will continue until the entire Northeast is fully exempted,” Sonam said.
The RGUSU president informed that the state government had sent security forces to the university in order to stop the students from coming to Itanagar to protest. The union condemned the state government’s attempt to muzzle the students’ democratic right.
Members of the RGUSU later submitted a memorandum to the union home minister, demanding removal of the CAA from the entire Northeast.