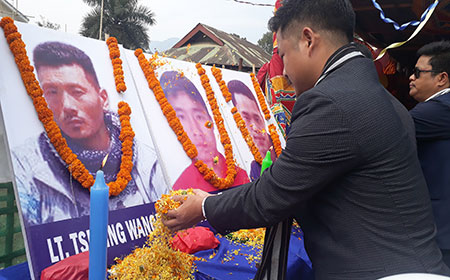 Staff Reporter
ITANAGAR, Feb 22: The families of Risso Tari, Tsering Wangdi and Biki Ruja observed ‘Martyr’s Day’ at the IG Park tennis court here on Saturday to mark the first anniversary of the anti-PRC movement.
Highlighting the hardships faced by many during the anti-PRC agitation in February last year, organizing chairman Risso Kiagung
announced that “statues of the three will be erected on the ‘martyr ground’ to honour and remember the sacrifices made by the three martyrs for the indigenous people of the state.”
He appealed to the state government to provide financial support for erecting the statues of the three, and to officially notify the ground as ‘Martyrs Ground’.
Kiagung also asked the government to bring those involved in the killings to book.
Late Ruja’s father, Biki Nera, requested the state government to provide a government post higher than the one currently assigned to the next of kin of the three deceased, and to erect their statues.
Stating that “the three men were no less than soldiers,” businessman Haa Tatu asked the organizing committee to organize a “martyrs’ cup tournament, similar to the Hangpan Dada Memorial Trophy,” in memory of the three men.
Also addressing the gathering, Capital SP Tumme Amo appealed to the citizens to maintain peace in the state in order to avoid such unfortunate incidents in the future.
Later, the gathering also paid homage to senior journalist late Taro Chatung.
The programme was also attended by victims who were reportedly injured during the anti-PRC movement, besides members of various student unions.