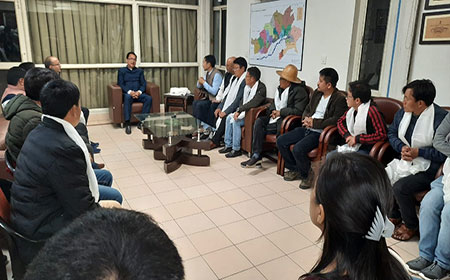 NEW DELHI, Feb 23: Arunachal Deputy Chief Minister Chowna Mein held a discussion with a group of landowners from Upper Siang, Shi-Yomi, Anjaw, Lohit, Kamle and Siang districts at the Arunachal Bhavan here on Sunday.
The group of landowners is in the national capital as part of an eight-day exposure tour to successful dam sites of the country.
“Himachal Pradesh, which also has hilly terrains like Arunachal, has already harnessed more than 50 percent of its hydropower potential, whereas we could only harness upto 1 percent till date,” the DCM told the group.
The group will participate in an awareness programme on various aspects of hydropower projects, to be conducted by the Central Board of Irrigation & Power, on Monday. This will be followed by visits hydropower projects in Himachal Pradesh. (DCM’s PR Cell)