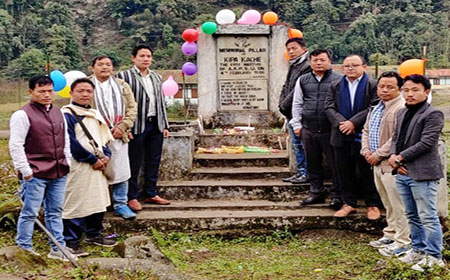 NYAPIN, Feb 27: Members of the All Arunachal Pradesh Students’ Union (AAPSU), the Nyapin Nyobia Sangram Phassang Students Union and the North East Students Organization paid rich tributes to AAPSU martyr Kipa Kache at his memorial here in Kurung Kumey district on Wednesday.
Speaking on the occasion, former AAPSU president Takam Tatung said Kache’s sacrifice would be remembered forever by the people of the state. He suggested that the memorial structure, situated in the compound of the government higher secondary school here, should be beautified.
“The memorial pillar erected by the AAPSU in his honour should be developed as a tourist spot by improving the infrastructure. I appeal to the state government to look into the issue,” Tatung said.
Late Kache was killed in a firing by security forces in 1986, during the anti-refugee movement launched by the AAPSU. He was studying in Class 6 at the time of his death.
NESO organizing secretary Marge Riba, former AAPSU leader Duyu Nama, current AAPSU executive member Risso Kyagung, and a friend of late Kache was also present.