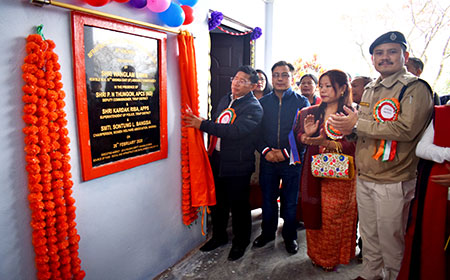 KHONSA, Feb 27: Khonsa East MLA Wanglam Sawin inaugurated four new classrooms at Bo-Peep Upper Primary School here in Tirap district on Wednesday, on the occasion of the school’s annual function.
The school was established in 1974.
In his address, the MLA, who inaugurated the classrooms in the presence of DC PN Thungon, SP Kardak Riba, HoDs, parents, students and others, praised the school’s management, headed by Women’s Welfare Association (WWA) chairperson Sontung Lowang Bangsia, “for running the school smoothly under the aegis of the WWA,” and said the school can now accommodate more than 200 students.
Sawin also expressed appreciation for Chief Minister Pema Khandu “for funding for construction of the classrooms under SIDF and DoTCL.”
“Creation of new school building is necessary, but building of quality human resources through value-based quality teaching with utmost dedication and sincerity is of utmost importance to accomplish quality education,” he said, and urged the parents to cooperate with the school’s management “as parents are the first teachers for the children.”
Responding to a memorandum submitted by the school’s management, the MLA assured to initiate the construction of an auditorium at the school in the near future.
He took the opportunity to exhort the people to “pay their water and electricity charges bills sincerely, so that the revenue generated is properly utilized for improvement of health and education of the state.”
The DC in his address suggested that cleanliness be maintained in the school, and advised students in general to not indulge in cheating in exams.
Stating that the academic results of the district have gradually improved over the past few years, Thungon announced to provide Rs 1 lakh from the DC’s untied fund for procuring desks and benches for the school.
Earlier, Bangsia read out the school’s annual report, and said “every effort is being made to maintain certain standard of quality education, and also sanctity and decorum, to ensure that the school becomes a model institution for others to emulate its shining example.”
Registered in 1990, the WWA receives grants-in-aid from the Namsang-Borduria Trust Fund, the urban development department, the MLADS, and voluntary donors to run the school.
She expressed gratitude to former PHE&WS EE Likha Tekhi, former Tirap DCs Sachin Shinde and late Kamlesh Joshi, former WWA chairperson, late Shampa Lowang, the chief minister, Sawin, and the incumbent DC for supporting and aiding the school in various ways.
Bangsia also informed that the WWA would rename the children’s park as ‘Martyr Hangpan Dada Memorial Recreation Park’.
The MLA later released the third edition of the school’s magazine, The Voyage.
The MLA, the DC, the SP, and the WWA chairperson gave away the prizes to the meritorious students of the school.
Students and teachers of the school made cultural presentations. (DIPRO)