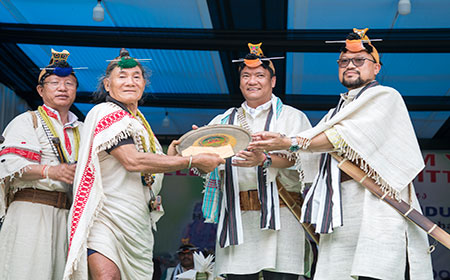 PITAPOOL, Feb 27: The state government is committed to preserve the indigenous culture through promotion and teaching of local dialects, said Chief Minister Pema Khandu, attending the Nyokum Yullo celebration at the general gro-und here in Lower Subansiri district on Wednesday.
Appealing to community-based organizations and intellectuals to “come forward and suggest or help us in this endeavour,” Khandu underscored the significance of speaking in the local dialects, saying local dialects are “the strongest connect to one’s culture.”
“While it is necessary for today’s generation to go outside for higher and technical education, it is also necessary that they learn and speak in their native languages,” the CM said.
He lauded the Nyishis for zealously preserving their traditions and culture and taking pride in their roots, and urged the younger generation to continue upholding their traditions and preserving their culture for posterity.
“No one from outside can help. If Nyishi culture is to be preserved, only the Nyishis can do it,” he said.
Giving assurance that the state government would provide all-out support in developing the region, the chief minister congratulated the people here “for having an able leader in Taba Tedir,” who is the local legislator and education minister.
Khandu, however, expressed regret that “due to various reasons, the lifeline of Lower Subansiri, Kra Daadi, Kurung Kumey, Kamle and Upper Subansiri districts – the Potin to Pangin stretch of the Trans-Arunachal Highway – is still waiting to see the light of day.”
He cautioned people against seeking “illegal” land compensation, and urged those who have already taken huge compensation amounts against nonexistent land and properties to voluntarily return the amounts to the government.
“I announce here today that the state government is serious on the note, and soon law will take its course. I request those who have received excessive payments for land compensation without having any land or property to return the same before police arrive at their doors,” he said.
Reiterating his uncompromising stand against corruption, Khandu expressed regret that “a few government employees mislead the people who are actually innocent.”
Referring to the recent Staff Selection Board (SSB) exam scam, the chief minister said “I was hurt the most” by it.
“I was in Tawang, attending a meeting, when I came to know about the incident. I immediately left by road and reached Itanagar late at night. I couldn’t sleep properly,” he said.
Khandu said the SSB was constituted to offer a level playing field to educated unemployed youths, irrespective of social background.
“How could a few employees dare to do corruption in this is beyond my understanding. I reiterate that no one involved will be spared,” he said.
The CM felicitated the local priests of the festival, as well as those who were members of the organizing committee of the first ever centralized Nyokum Yullo celebration in Joram in 1967.
Namsai MLA Chow Zignu Namchoom, who accompanied the CM, said “a separate, dedicated department has been created to protect and preserve the fast eroding tradition, culture and tribal dialects.”
He also said that the present government “will extend all possible help in every sphere of development activities in the area.”
Popular singers Bengia Hemanta and Bengia Tab rendered heart-touching and uplifting melodies that added to the flavour of the festival, and the festivity continued till late in the evening.
In Kimin, the Missing Autonomous Council’s Chief Executive Councillor, Paramanda Chayegia, participated in the festivity and underscored how the festivals of all tribes, whether in Arunachal or Assam, are agriculture-related.
Chayegia, who is also the president of the Missing Ba:ne Kebang, informed that “an Abo Tani convention will be held this year to hold discussions on historical, social, cultural and economic aspects of the Tanis, and ways to develop a common Tani language and Tani identity.”
Kimin ADC Likha Teji called on the people to be more involved in their traditional festivals to learn more about their traditions and cultures.
He informed that the primary purpose of inviting the Missing Ba:ne Kebang president was to connect people with similar ties.
“The Missings are our brothers. Our culture is the same, our language is the same. We have simply been divided by political lines, and we need to stay connected,” Teji said.
Lakhimpur DC Jeevan B also attended the celebration. (CM’s PR Cell & sources)