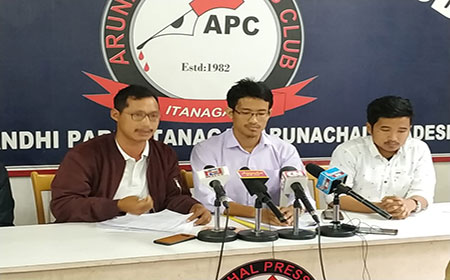 Staff Reporter
ITANAGAR, Feb 27: The Arunachal Pradesh State Selection Board (APSSB) aspirants’ Interim Committee for Justice and Reformation (ICJR) has written to Chief Minister Pema Khandu, seeking immediate suspension of former top APSSB officers.
In its representation, the aspirants said that former APSSB officers AC Verma, SK Jain, GS Meena, Tamune Miso and Kapter Ringu should be suspended till the investigation into the recent examination scam is completed.
Addressing reporters at the press club here on Thursday, candidate and ICJR convenor, Tadar Kaming, asked why the other officers were not being treated at par with Ringu, and whether the government was shielding them.
“Why was Ringu not suspended for her role in the examination malpractice, and why have the other officers, who are equally responsible for the malpractice, not been put behind bars?” he questioned, and sought retirement of the officers under Clause 56(j) of the Central Civil Services Rules.
Besides reiterating its demand for fresh examinations for the LDC and the JSA posts, the committee expressed apprehension that similar malpractice might have occurred in the exams for the UDC and the storekeeper posts held last year, and sought cancellation and fresh examination for those posts also.
The aspirants highlighted the lapses and loopholes in the standard operating procedures, and demanded that the APSSB be “revamped” through consultations with Rajiv Gandhi University and the North Eastern Regional Institute of Science & Technology.
Commending the role of the invigilator who helped in bringing out the corruption in the recruitment system, the candidates said the invigilator was deserving of a state award and incentive in the form of a government job.
This was, however, the candidates’ opinion; they had not spoken to the invigilator in the matter.
While the aspirants lauded the swift action of the special investigation cell (SIC) led by SP M Harsha Vardhan and said they were content with the updates provided by the SP, candidate Gyamar Maya said “even as the SIC does its job, the state government has to take strict action against the board members.”
“The other officers also need to be interrogated. The entire team of APSSB officers is responsible for the corrupt practices. If the state government does not take appropriate action, we will approach the Central Vigilance Commission and the central personnel & training department,” he said.
The candidates said if their demands are not met within a week, they would launch a protest rally from Dera Natung Government College to the Raj Bhavan on 6 March.
Aspirant Toko Takar called on the citizens to show their support and participate in the rally.
“Please support us in the fight against corruption and join us in the protest if the government does not agree to the demands. If you do not lend your support then please do not hurl accusations at us if we are demoralized and stop our movement in the process,” Takar said.

Former APSSB undersecretary Kapter Ringu has been suspended by an order issued on 25 February by Chief Secretary Naresh Kumar.
The order states that “Kapter Ringu (APCS) senior grade is deemed to have been suspended with effect from date of detention/arrest, ie, 20/02/2020, in terms of Sub-rule (2) (a) of Rule 10 of the Central Civil Services (Classification, Control and Appeal) Rules, 1965, and shall remain under suspension till further orders.”
During the period of operation of the order, Ringu has been prohibited from leaving Itanagar without obtaining prior permission from the chief secretary.