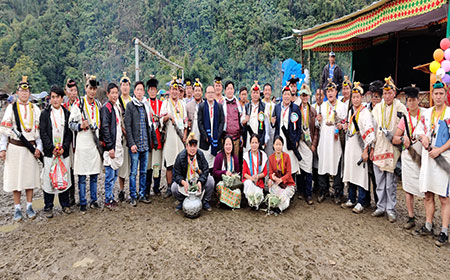 Staff Reporter
NYAPIN, Feb 27: Picturesque Nyapin town in Kurung Kumey district came to life during the Nyokum Yullo celebration on Wednesday.
A large number of people turned up to celebrate the festival at the general ground in Upper Nyapin. Cultural events, including the popular Buya dance, were the chief attractions of the day. Nyokum rituals were performed, and the festival’s mythology was read out.
Joining the celebration, Rural Development Joint Director Chera Sanjiv urged the people not to mix religion, politics and culture.
“In the run-up to this year’s Nyokum celebration, some unsavoury controversy was witnessed on social media over the mode of celebration. This was very unfortunate and should be avoided in future. Nyokum is a festival of every Nyishi; therefore, irrespective of the religion one follows, everyone should participate in the celebration,” he said.
He also appealed to the people to shun the money culture during elections.
“Cash for vote is the root cause of corruption in the state. If we want to see our state develop, we have to end the practice of selling votes during elections,” he said.
Former president of the All Arunachal Pradesh Students Union, Takam Tatung, who also attended the celebration, made a fervent appeal to the people to separate religion from celebration of traditional festivals.
“My parents were first-generation Nyishis who accepted Christianity. However, they have always taught us the importance of Nyokum, and therefore we never miss the celebration. Nyokum is our identity as Nyishis, so we should all celebrate it with pomp and gaiety,” Tatung said.
He also called for celebrating Nyokum Yullo in its original form.
Tatung meanwhile expressed concern over the progress of Tadar Taniang Government Model Degree College, and urged the people to look into the issues.
“The student enrollment is extremely poor. Something is seriously wrong in the planning process. Everyone will have to join hands to take this college towards a better future,” he said.
Tatung urged the people of Kurung Kumey to remain in touch with their roots, and said the first step in this direction would be to construct proper houses and toilets in their ancestral home town and villages.
Celebration committee chairman Tadar Zaman and vice-chairman Tadar Tarish also spoke.
The celebration was followed by a community feast.
Meanwhile, Tarish informed that they submitted a memorandum to Chief Secretary Naresh Kumar, who attended the Nyokum celebration in Sangram, seeking improvement of mobile and internet facility in Nyapin town.
“The CS has assured that there will be visible improvement within the next three months,” Tarish informed.