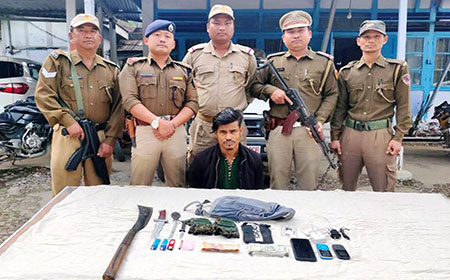 KHONSA, Mar 2: The state police arrested a person for his alleged involvement in extortion activities in the name of the underground group, NSCN, in Tirap district.
The alleged accused Md Karim Khan, alias Kalu of Assam’s Lekhapani area, was apprehended from the Post Office Colony here on Monday, said Tirap SP Kardak Riba.
Police swung into action after receiving complaints from various quarter, including government employees and businessmen, who had reportedly received extortion demands and life-threatening calls, and the police laid a hunt for the accused.
Extortion money of Rs 20, 900; traces of suspected brown sugar and heroin; three mobile phones with five SIM cards, which were allegedly used for demanding extortion money; mobile chargers and Aadhaar card, have been recovered and seized from the possession of Khan.
A case has been registered against the accused at the Khonsa police station under various sections of the IPC.
Further investigation is on, Riba said.
Besides this, Khan has two more cases registered against him-one at Itanagar police station and the other at Khonsa police station. He was being tried in different courts. (DIPRO)