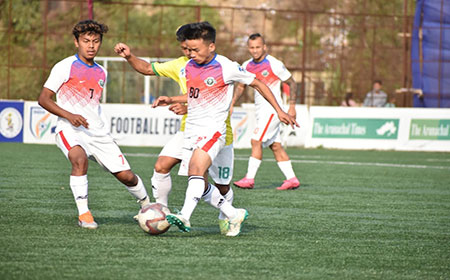 CHIMPU, Mar 3: Bamang Taji FC (BTFC) survived an early scare to hold defending champion Gora Makik SC to a 1-1 draw and finish in the top-four in the Indrajit Namchoom Arunachal League (INAL) here on Tuesday.
Timmy Ryngkhulem scored for GMSC in the 40th minute to set BTFC nerves jangling but Hage Talo restored the parity in the 59th minute with a beautifully taken penalty kick.
GMSC maintained their third spot with eight points from four matches while BTFC secured their place in the top-four with seven points from five matches.
Although Tuesday’s match result did not make any difference to the teams’ current positions, it shattered Kargu Kardi FC’s any hope of making it to the top-four. With a game still to play, KKFC are at fifth place with three points. Even if they win the match, KKFC will remain at the fifth spot with six points.
Todo United are still atop the point table with 10 points, followed by Capital Complex in the second spot with nine points from four matches.
Keyi Panyor are yet to open account. They will meet Capital Complex FC on Wednesday.