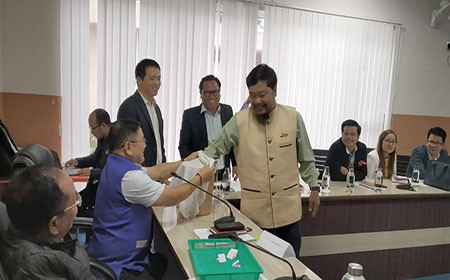 ITANAGAR, Mar 5: Wards 2, 4, 9, 10, 11, 12 and 15 of the Itanagar Municipal Corporation (IMC) have been reserved for women, following a draw of lots for 33 percent reservation for women, held at Dorjee Khandu Convention Centre here on Thursday as per the Arunachal Pradesh Municipal Corporation (APMC) Act, 2019.
The draw of lots was held in the presence of Itanagar MLA Techi Kaso, Capital Complex DC Komkar Dulom, IMC EAC Ashok Tajo, IMC EE Tadar Tarang, former councillors, representatives of political parties, and others.
The post of the mayor went in favour of men by a draw of lots.
The DC informed that the mayor and the deputy mayor will initially be elected for two-and-a-half years. “They shall be reelected after two and half years by the councillors, as per the act,” he said.
The IMC EAC explained the APMC Act, and informed that the capital region has adopted the term ‘corporation’ instead of ‘council’.
He also informed that, after the delimitation process, the total number of wards in the IMC has been reduced from 30 to 20.
The local MLA urged the future councillors to “work with responsibility once they get elected to the post.” (DIPRO)