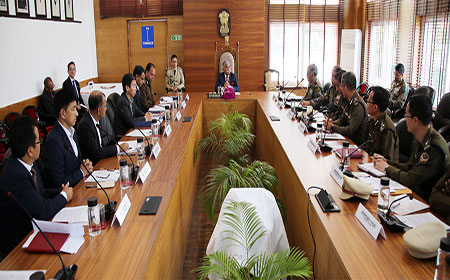 ITANAGAR, Mar 8: Stating that “extortion activities and related demands will not be tolerated in the state,” Governor BD Mishra has exhorted all stakeholders to make “concerted, unified efforts to root out the extortion menace.”
The governor said this during a high-level meeting on prevention of extortion by insurgent groups in Tirap, Changlang and Longding (TCL) districts, at the Raj Bhavan here on Sunday.
The meeting was attended by DGP RP Upadhyaya, 3 Corps GOC, Lt Gen RP Kalita, 2 Mountain Division GOC, Maj Gen Sanjeev Chauhan, Home Commissioner Kaling Tayeng, IGP (Intelligence) HS Dhaliwal, IGP (Law & Order) Chuku Apa, and the deputy commissioners and superintendents of police of TCL districts.
Mishra advised the DCs and the SPs to increase the frequency of their interactions with the local people.
“SPs must spend more times in the fields and connect with the masses in their districts for instilling a sense of confidence among the people,” the governor said.
“They must also have command and control over their subordinates and officers-in-charge of the police stations in their districts for effective counter-extortion operations.”
He also recommended that, to the extent practicable, police personnel must not be given postings at their home police stations.
The governor advised the home commissioner, the DGP and the 2 Mtn Divn GOC to “explore the possibility of joint checking at check gates by civil administration, Army and police in the TCL region.”
Expressing concern over early release of extortionists, he directed them to take all legal and administrative remedies, “so that culprits do not roam around freely.”
The DGP, the IGP, the commissioner and the GOCs apprised the governor of the extortion menace in the TCL region, and the steps being taken to combat unlawful and nefarious activities of the militants.
The ground situation was discussed with the DCs and the SPs of the three districts to help them understand the criticalities and the challenges, and district-specific operation strategies, integrating all security forces, were chalked out. (Raj Bhavan)