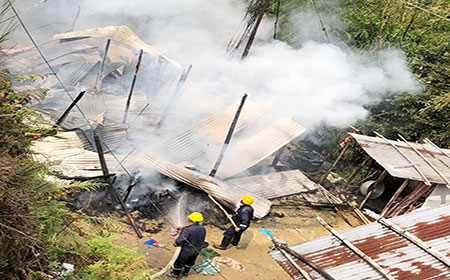 ITANAGAR, Mar 11: Two houses were devoured in a fire accident that occurred at Donyi Colony near the Jully tri-junction, here on Wednesday morning.
The fire reportedly broke out around 11.30 AM, informed SP Capital Tumme Amo, adding that “no casualty was reported and the reason for accident appears to be because of short circuit.”
The fire tender rushed to the spot as soon as the information was received and doused the fire from spreading, Amo informed.
The owners of houses have been identified as Takam Tado Mama and Byabang Tariak.