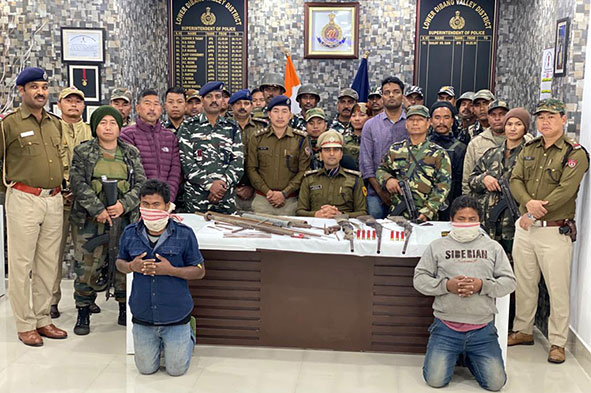 Staff Reporter
ITANAGAR, Mar 12: A joint team of the police and the CRPF here in Lower Dibang Valley district arrested two persons for illegally manufacturing and selling arms, SP Sanjay Kumar Sain informed on Thursday.
The duo has been identified as Kamge Taid and Sabal Taid.
The arrest came following an operation conducted by the team, led by Sain and DSP (HQ) Ringu Ngupok, in and around Paglam circle after receiving input that an illegal arms factory was operating from a densely forested area located around 100 kms from Roing.
The team posed as potential customers out to buy 12 bore guns. However, before the deal could be made, Kamge got wind of the motive of the ‘customers’, and it led to an exchange of fire between the team and Kamge, the SP said.
“The team retaliated and managed to overpower the alleged accused Kamge Taid, leading to his arrest and subsequent recovery of two illegally made weapons and a few live rounds,” Sain said.
Following interrogation, the team busted the makeshift weapons factory and recovered two more weapons along with several live rounds, besides arresting Kamge’s accomplice, Sabal Taid.
A diary, “which reveals that the duo manufactured and sold around 20 guns till date – out of which four have been recovered – was also recovered from the possession of the accused. The police are on the verge of recovering more guns which have been sold in the neighbouring state,” the SP said.
One pistol, three 12 bore guns, and eight live cartridges, along with manufacturing tools and equipment, have also been seized, he said.