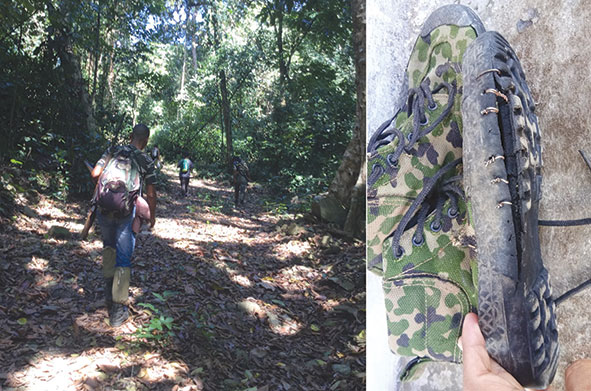 [ Tongam Rina ]
PAKKE, Mar 12: The personnel of the Special Tiger Protection Force (STPF) which is instrumental in keeping the Pakke Tiger Reserve (PTR) in Pakke-Kessang district safe from poachers as frontline staff, received their salaries in January this year, after a six-month gap.
They are not sure when their next salary will reach them. Until it arrives, they will have to rely on moneylenders to lend them money on interest that is sometimes as high as 10 percent.
The STPF personnel get a measly Rs 14000 a month. The salary is funded by the National Tiger Conservation Authority (NTCS), via the state government.
In other states, the NTCA directly transfers the money to the reserves through a tiger foundation. The forest department in Arunachal is yet to form a foundation; therefore the funds for salaries and other expenses are given to the finance department, which does not release the amount on time, according to officials in the forest department.
One of the personnel said that his daughter came back crying from school one day because the school authorities had written the amount due to the school on her report card.
“I met the school authorities and requested them not to do it again. My daughter should not be humiliated because I can’t pay on time,” he said.
Another said that he has stopped going to the grocer because he cannot repay the money that he owes.
“I have stopped going to the market because the shopkeepers often shame me, saying that even though I wear a uniform I can’t repay them on time,” he said. He has served in the STPF for more than 10 years.

Inadequate ration, lack of uniforms, and just a pair of shoes

It’s not only the salary that is an issue. There is often shortage of rice, even though they get 15 kilos of rice per month.
“Rice is not enough as we eat two heavy meals a day,” one of them said.
Uniforms have not been issued in the last two years, while only a pair of shoes is given a year, after the Wildlife Conservation Trust (WCT) stopped funding.
From 2012 till 2018, the WCT had provided funds for ration, footwear and uniforms for the frontline field staff.
“We have to cover 200 kilometres a month, so the shoes barely last three months,” the personnel said.
The number of personnel is less, so they often have to cover more than 200 kilometres a month, with or without shoes. Often, they have to buy shoes on their own or stitch the torn ones (see picture).
“It is mandatory for us to cover 200 kilometres a month, which is logged on a patrolling app called MSTRIPES (Monitoring system for tiger, intensive protection and ecological status) designed by the NTCA and the Wildlife Institute of India,” they said.
During monsoon, however, it is not possible to even cover 10 kilometres, as the streams are mostly in spate. The entire park is crisscrossed with pristine streams that swell in the summer. They do not venture out of the park during summers as poachers are likely to enter the park and the flooded streams make movement difficult.
During monsoon, they also have to battle illnesses. Most of them suffer from malaria and waterborne diseases during summer.
“I dread medical emergencies as I don’t have cash and I am in debt. I pray every night for my and my family’s wellbeing because I would not be able to afford costly treatment. The force is insured for eventualities but not families,” one of the personnel said.

One of the personnel joined the STPF 11 years ago for Rs 2400. Now he gets Rs 14000 – the highest amount that an STPF staffer is entitled to – toiling for days together in the summer heat, the rains, and the cold winters.
Some of the personnel have already left because they could not cope with the meagre salary.
“The salary is less and not paid on time, so some have left the force. It is a great loss for the park when experienced personnel leave as not many can deal with long hours of hard work,” said a staffer.
Some of the personnel have been working for 20 years.
“I think of leaving the force, but my love for the park and animals has stopped me from leaving. Though my work might not be appreciated by others, I can’t leave the park. I have to keep it safe,” says another.
Most of the STPF personnel stay at the 39 anti-poaching camps. There are just 50 STPF staffers for the park, which is severely inadequate for a park the size of Pakke in the tough terrain.
They do not have weekends but are entitled to five days’ holiday in a month, which is rarely used as the workload is hectic.
“Everybody works hard, so unless there is pressing work, I don’t feel like going home,” another one said.
All they are asking for is regularization of their jobs, payment of salaries on time, good supply of uniforms, and at least two pairs of shoes.
The five STPF personnel this daily spoke to said they are disheartened by the apathy of the forest department and the government.
“They know our problems but for years have ignored us,” they said. “We work hard; we have taken this reserve to great heights, but no one seems to care for us.”
On the other hand, the STPF personnel have a case pending in the court, seeking regularization of their jobs. None of the STPF personnel is in a permanent position, even after having worked for more than 15 years. The lawyer’s fees are raised by the underpaid STPF personnel. The case is ongoing.