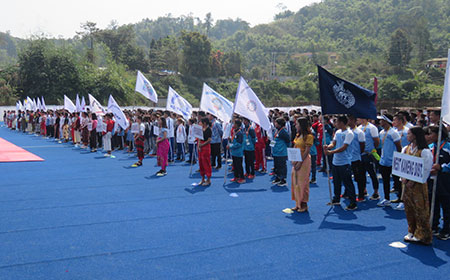 CHIMPU, Mar 13: An impressive march-past by the contingents from 25 districts and the sports control boards of RGU and the APP, and a magnificent martial arts demonstration by students of Sangay Lhaden Sports Academy (SLSA) marked the opening ceremony of the 3rd State Olympic Games that lasted for more than an hour here on Friday.
Khelo India Youth Games boxing silver medallist Huri John carried the Olympic flame around the field, while former weightlifter Yukar Sibi administered the oath to the teams. Popular singer Jeli Kayi enthralled the spectators with charming Sufi and Bollywood songs.
Chief Minister Pema Khandu, who declared the Games open after the opening ceremony, reiterated his government’s commitment to all-round development of games and sports in the state. 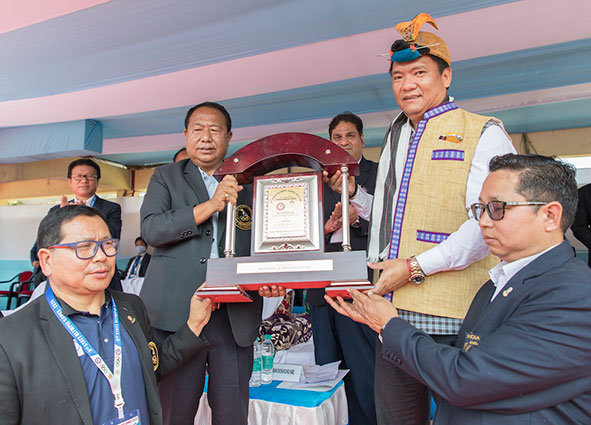 Stating that Arunachal could not do well in sports in the past for some reason or other, Khandu said “the state has made tremendous progress in this sector in the past few years.”
To drive home his assertion, he said Arunachal emerged third among the eight NE states and 23rd in the country in the Khelo India Youth Games which was held in Assam’s capital city, Guwahati, in January.
Acknowledging that infrastructure is of utmost importance to make progress in games and sports, Khandu informed that several sports infrastructures could not be completed on time due to the discontinuation of the special plan allocation.
“But the state government has sanctioned the gap funds for all those uncompleted infrastructures,” he said.
“While the stadiums in Ziro (Lower Subansiri), Pasighat (East Siang) and Daporijo (Upper Subansiri) have been completed, the ones in Yupia, Tezu, Aalo and SLSA are in various stages of completion,” Khandu said.
He emphasized the need to develop such infrastructure in every district headquarters.
The chief minister said Arunachal would be the biggest gainer from the recommendations of the 15th Finance Commission, “as per an interim report,” and gave assurance that special provisions would be kept for developing sports infrastructure.
Khandu also agreed to fulfill the Arunachal Olympic Association’s (AOA) long-pending demand for an ‘Olympic Bhavan’. He said he would meet the AOA shortly to discuss the matter.
The chief minister meanwhile announced that an official proposal would be submitted afresh to the union sports ministry and the Indian Olympic Association (IOA) to host the 2026 National Games in Arunachal. His announcement drew thunderous applause from the sportspersons and the spectators.
The CM disclosed that the ministry had agreed to let Arunachal host the 2024 National Games, “but the offer had to be refused because of the fact that the state would not have been able to create the infrastructure needed to host the Games by 2024.”
He requested IOA secretary-general Rajeev Mehta, who was also present during the opening ceremony, to consider the proposal at his level.
Mehta expressed appreciation for the chief minister’s commitment to develop sports infrastructure in the state and assured to support the proposal when it comes up for consideration in the IOA.
Prior to the CM’s speech, the IOA secretary-general had himself advised the CM to submit an official proposal to host the Games.
The National Games is meant to identify and promote sports talents while also developing sports infrastructure.
Mehta said he was surprised by the progress made in sports by the NE states, particularly Arunachal, “despite huge shortage of quality infrastructure.” He expressed optimism that Arunachal would lead the country in sports in future if it is provided with infrastructure.
Among others, Sports & Youth Affairs Minister Mama Natung, Education Minister Taba Tedir, Namsai MLA Zingnu Namchoom, Sports Authority of India’s Regional Director Subhash Basumatary, and Meghalaya Olympics Association president JF Kharshiing attended the opening ceremony.