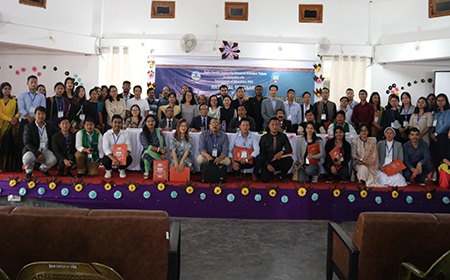 RONO HILLS, Mar 14: RWD Minister Honchun Ngandam on Friday urged academicians and scholars to include in their research activities contemporary issues that the society is facing, “to ensure effective utilization and management of the state government’s development agenda.”
The minister was addressing the inaugural session of a two-day national seminar on ‘India/Northeast India: Issues, dynamics and emerging realities’, organized by the Rajiv Gandhi University Research Scholars’ Forum (RGURSF), in collaboration with RGU’s education department, at the university here.
“Constructing roads in all the rural areas of the state is important, so that the rural economy grows,” the minister said. He added, however, that “obstacles like demanding excess compensation in TAH are not only a menace but a bottleneck to economical and social growth.”
Stating that the government is making sincere efforts to increase revenue generation, he sought the people’s cooperation in this regard.
Ngandam expressed interest in the sub-themes of the seminar and said, “All the issues that are going to be discussed in this two-day seminar are not only your concern but the concern of the politicians and the common people alike.”
Saying that the papers presented during the seminar would “serve as a policy document for the government,” he gave assurance that he would take up at the government’s level relevant issues that emerge from the seminar.
Dwelling on the seminar’s theme, Ngandam said, “There is enough potential, resource and dynamism in Arunachal and Northeast India which need to be tapped, understood and acted upon.”
Former vice-chancellor of Dibrugarh University, Alak Kumar Buragohain, in his keynote address said “Arunachal could be one of the richest repositories of traditional knowledge in the world.”
Stating that “Arunachal has tremendous possibilities in emerging realities in the realm of language, culture, tradition, rivers, natural resources and ecosystem,” he said harnessing and utilizing the state’s resources “is the need of the hour.”
RGU Vice-Chancellor, Prof Saket Kushwaha in his speech emphasized on “the dynamics in research studies,” and encouraged scholars to “maximize the usage of resources available in the region.”
He gave assurance that an e-library with more than three lakh e-books would be established in the RGUSRF office “in order to encourage academic interest.”
RGU’s Education Department Head, Prof Kesang Degi, expressed hope that the two-day discourse would “bring out positive changes in the interest of the state as well as the country.”
Meanwhile, RGURSF chairman Reken Lollen informed that “this year’s paper turn-up has increased with over 98 submissions from across the country.”