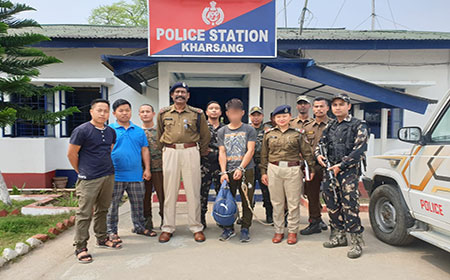 TEZU, Mar 15: Escaped convict Sophio Mepo alias Kalaiso Mepo was rearrested from Kharsang by a joint team of police from Tezu (Lohit) and Kharsang (Changlang) on the morning of 15 March.
A team comprising Kharsang PS OC, Inspector KM Das, Kharsang PS SI, Sunny Wangsu, Tezu PS L/SI, Bharti Mingki, and six other police personnel laid a trap and nabbed Mepo as he was trying to escape from Kharsang on an APST bus.
Mepo is accused of being involved in five cases, including rape, attempt to murder, and use and possession of illegal arms. He had escaped from the district jail here on 28 May, 2019, leading to a massive manhunt by the police. A lookout notice for him was issued, and the police engaged sources to track down his whereabouts.
On 29 January, 2020, Lohit police personnel spotted Mepo in the jungle near Tindolong and asked him to surrender. However, the police said, he started firing at them with a small firearm. The police opened fire in retaliation, and although Mepo sustained a bullet injury in his right thigh, he fled into the jungle.
After his rearrest on Sunday, Mepo has been brought back to the Tezu police station.