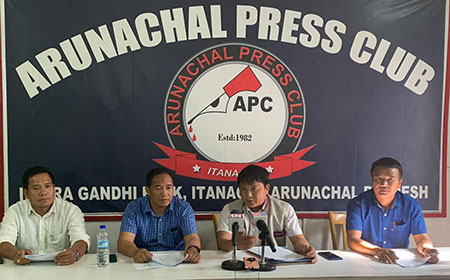 ITANAGAR, Mar 16: The All Arunachal Contractor’s Welfare Association (AACWA) has accused the state government of discriminating in the matter of releasing funds under the revised estimate (RE) recently.
Addressing media persons at the press club here on Monday, AACWA president Nabam Akin Hina claimed that several projects “which already had NIT” were scrapped, leaving the contractors who spent money devastated.
However, he said, no project for the department of karmik & adhyatmik affairs (DoKAA) and the department of Tirap, Changlang & Longding (DoTCL) was deprived of funds.
“No single scheme under DoKAA and DoTCL was left out in the current RE-2019-20, but at the same time many schemes were scrapped despite completion of the NIT process. Why this discrimination in releasing developmental funds?” Hina asked.
“The welfare government is for all; why such discriminatory treatment to other areas of the state?” he sought to know.
Hina claimed that the construction of the auction and collection centres for cardamom in Kimin, Namsai and Bhalukpong was scrapped from the RE, and said the discontinuation of the schemes has put a huge financial burden on the contractors.
“It seems the government is intent on pushing the contractors to a death-like situation as many contractors have spent lots of money but the projects are discontinued,” Hina said.
“If anything happens to the any contractor, the government should be blamed” he added.
“If the state government does not have financial stability, let there be a financial emergency and let President’s Rule be imposed in the state,” Hina said.
The AACWA also demanded that the government enhance the amount of tender limit for Classes III-IV and Class V contractors.
Hina claimed that the government was working on a modality to “fulfill the demand of an organization to make upto Rs 1 crore as work order system under the chairmanship of Education Minister Taba Tedir.”
The AACWA demanded that the government enhance the amount upto Rs 1 crore for Class V, Rs 2 crore for Class IV, and Rs 3 crore for Class III contractors. It threatened to go to court if the government fails to fulfill its demands.
The association also asked the government to come out with a white paper on the state’s financial status.
“If the government is in good financial position, why are the contractors being made to suffer?” Hina asked.