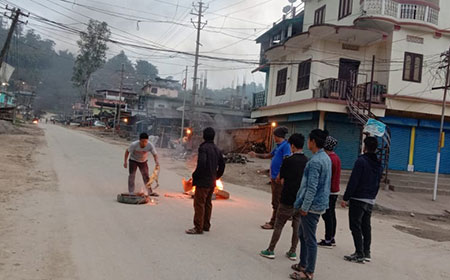 [ Karda Natam ]
DAPORIJO, Mar 16: The All Tagin Students’ Union on Monday imposed a 12-hour Upper Subansiri district bandh from 5 am in protest against the administration’s failure to meet its various demands.
The union has threatened to impose a second-phase bandh if the demands it had earlier placed before the deputy commissioner are not met.
The union is demanding that the DC instruct the officers and officials of the district to stay at their places of posting; improve the mobile and internet services; install an ATM booth in the premises of the district hospital; post subject teachers at the GHSS here and lecturers at the government degree college; and fix the opening and closing hours for liquor shops.