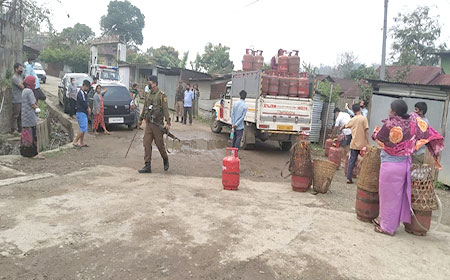 Khonsa, Mar 29: The Tirap district administration will identify the daily wage earners in the district and assist them.
DC PN Thungon on Saturday instructed all the HoDs to identify the daily wage earners in their respective departments and other areas, so that they may be provided with free accommodations and kitchens.
The district disaster management officer has been entrusted to liaise with the workers’ unions, the students’ union and market committee officials.
LPG cylinders are being distributed to the colonies and sectors on a roster basis from 28 March. The PDS items for the consumers in Lazu were dispatched from Khonsa on Sunday.
The district administration provided 2000 facemasks, 300 hand sanitizers, and 135 gloves to the health department on Sunday. The equipment were also distributed among the police personnel on duty, SBI staffers, sector officers, and officials engaged in Covid-19 duties.
The administration procured the equipment with money donated by all the four legislators of Tirap, besides the NBA and the NBCA.
Apart from the village entry gates, the check gates at Deomali, Hukanjuri and Dirok have been sealed, SP Kardak Riba informed. (DIPRO)