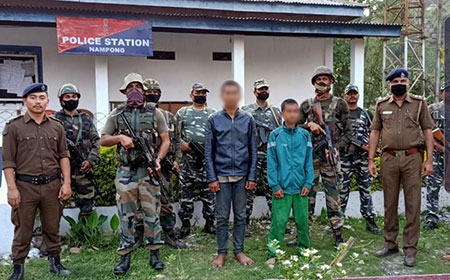 NAMPONG, Apr 4: A joint team of the Changlang police, the 19 Assam Rifles and the 171 CRPF arrested two operatives of the ULFA (I) outfit from the vicinity of Longvi village in Changlang district on 4 March.
The arrest was made following
an operation the team launched after receiving input that ULFA operatives had sneaked into Changlang.
The operatives have been identified as self-styled private Jahnu Boruah (20), from Dibrugarh, and self-styled private Chandrakanta Likharu (26), from Karbi-Anglong, Assam.
The duo revealed during interrogation that they had come from the ULFA (I) camp located in Myanmar and were on their way to Assam to carry out illegal activities.
Changlang SP Mihin Gambo, who supervised the operation, lauded the joint team for apprehending the underground operatives.
A criminal case has been registered at the police station here. (DIPRO)