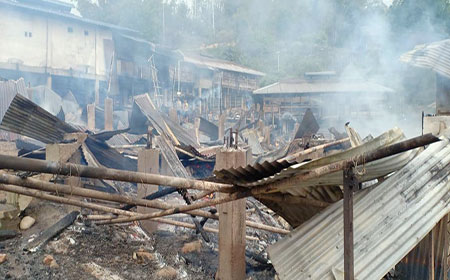 Staff Reporter
ITANAGAR, Apr 4: Two houses were reduced to ashes in a fire that broke out in Loffa village, in East Kameng district, on Saturday morning.
The houses belonged to Tacho Yangda, Darang Yangda and Jimri Yangda.
Loffa village is 10 kms from district headquarters Seppa. Sources informed that the fire broke out at around 6:30 am, when most of the family members residing in one of the houses were in Seppa to attend a relative’s last rites.
A family member who was alone in the house and was preparing meal reportedly left for the nearby garden to pick vegetables after lighting a fire in the kitchen. It is suspected that a bottle of diesel that had been kept near the hearth triggered the fire.
Although no casualty has been reported, all belongings, including livestock and ornaments amounting to lakhs of rupees, were reportedly reduced to ashes.
A fire tender was called, but it arrived after the fire had already been contained from spreading further.
Reaching out to the affected families, Sports Minister Mama Natung contributed Rs 1,40,000 to them as immediate relief.